Saturday (2nd September 2017) was a lovely day for a trip to Dundee (it’s always sunny in Dundee!)

It was an early start from Glasgow, but we didn’t mind as we were heading to celebrate all of the great work that has been achieved by the volunteers and staff at Speaking Out, the ongoing oral history project to record the history of Women’s Aid throughout Scotland over the last 40 plus years. And there is a lot to celebrate! 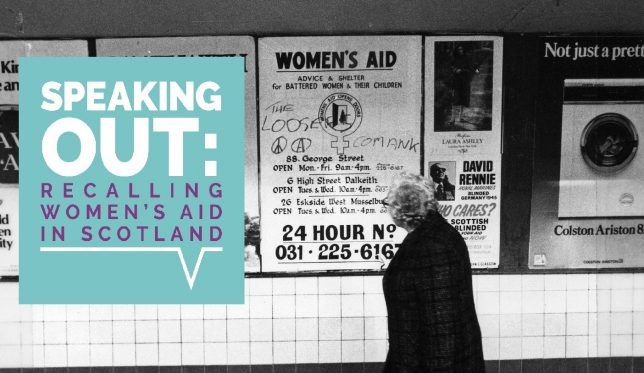 The day opened with the Dundee Women’s Aid choir welcoming us to the Steeple, a lovely venue at the heart of the city centre,

Marsha Scott of Scottish Women’s Aid then provided a short welcome and introduction, then Lesley Orr explained how the Speaking Out project had come about and underlined the need to record the history of the Women’s Aid movement given it’s significance as a crucial social movement in Scotland. As always Lesley’s words were inspiring!

As were the words of the pioneers of the movement in Scotland. Such women, working voluntarily to help each other were ‘Rocking the Status Quo’:

Our very own Hannah Telling was up next to discuss the longevity of inaccurate discourses of violence against women which have regularly portrayed perpetrators as working class and survivors as provoking violence. The continuation of such myths from the nineteenth century to the present day was striking. But as Hannah concluded Scottish Women’s Aid have actively challenged these discourses by opposing violence against women in all forms and by providing support and practical help for women of all backgrounds throughout Scotland since the early 1970s. Important work which they continue to do today.

Before lunch we attended a break-out session on the making of the Speaking Out film which features clips of some of the women interviewed for the project, both workers in refuges and service users. Sarah Browne underlined the importance of sensitive training in oral history interviewing. The dedication and professionalism of all of the volunteers, as well as the Speaking Out team, has resulted in a unique resource for researchers, students and for the Women’s Aid movement itself.

After lunch we had an energising performance of poetry from Mridul Wadhwa which was another highlight of the day.

Then we attended another break out session in which we learned about the Scottish Women’s Aid archive at Glasgow Women’s Library where the project archivists Elizabeth O’Brien and Nicola Maksymuik  told us about the collection and volunteer Yvonne McFadden shared her experience of working on comprehensively cateloguing the newspaper clippings collection. Yvonne explained that it could be emotional work which would often make her angry given the portrayal of survivors of violence as ‘asking for it’. However, while the continuities could be depressing, the work to combat violence against women as evidenced in the newspaper clippings was energising too. The database that Elizabeth, Nicola and Yvonne have been working on will soon be available on the Glasgow Women’s Library online catelogue.

We then heard from the volunteer panel of Dot Aidulis, Yvonne McFadden and Morag Allan Campbell who shared their experience of volunteering in various capacities in the Speaking Out project. Yvonne, a historian and researcher, spoke of how working on Speaking Out has re-ignited her interest in history and led to new friendships and experiences she wouldn’t have had otherwise. For Morag, volunteering on Speaking Out while making the transition from full-time office work to PhD research, has given her confidence and strength.

Dot spoke eloquently and powerfully of her experience as a service user, of hearing about the Speaking Out project at another event and of approaching the team to take part. She spoke of coming across a small leaflet for women’s aid while living with her abusive partner. This ‘planted a seed’ and made her aware of a whole support system out there that could help her. That feeling built up and was instrumental in helping her to  find the courage and confidence to leave. Dot called Women’s Aid soon after she got to Glasgow and has received great practical and emotional support over the years. For Dot the power of Women’s Aid was in telling her story and being believed. Dot has achieved so much in her life, before and after living with her ex partner. It was truly inspiring and very emotional to hear her talk of her pride in participating in committees in the Scottish Parliament discussing violence against women. I’m glad that we have Dot advocating for women in Scotland! I’m glad that all of the volunteers in Speaking Out have given their time, expertise and knowledge to such a worthy and truly collaborative project.

The day ended with a rousing and thought provoking talk from Lesley Riddoch on the importance of doing politics differently and the need for local power which would increase women’s participation. She suggested we needed a reordering of society to prioritise the average rather than the elites. The effectiveness of grassroots social movements like Scottish Women’s Aid in making women’s voices heard was crucial in establishing such local power for everyone. Lesley certainly gave us lots to think about.

Women’s History Scotland is a partner in the project along with the Glasgow Women’s Library and the Centre for Gender History at the University of Glasgow.

If you’d like to know more about the history of, and contemporary, campaigns against violence against women in Scotland see: