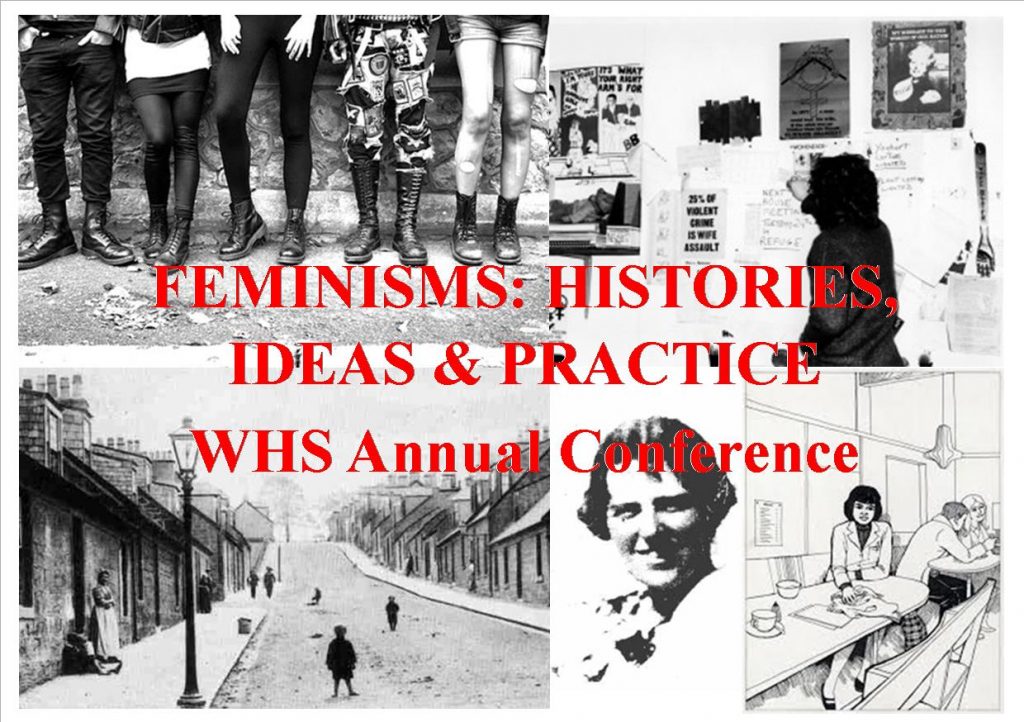 The annual WHS conference which examined the theme of ‘Feminisms: Histories, Ideas & Practice’, was held on Friday 9 September. Glasgow Women’s Library, recently lauded in the national press as ‘a treasure trove that shows how far feminism has come’, served as a fitting venue for this year’s event. At the completely sold out conference, delegates were treated to a host of wonderful papers, with themes ranging from the emergence of Women’s Aid to the feminist fashion of Doc Martens. The event concluded with the Sue Innes Memorial Lecture, delivered by the inimitable and inspiring Zoe Fairbairns. 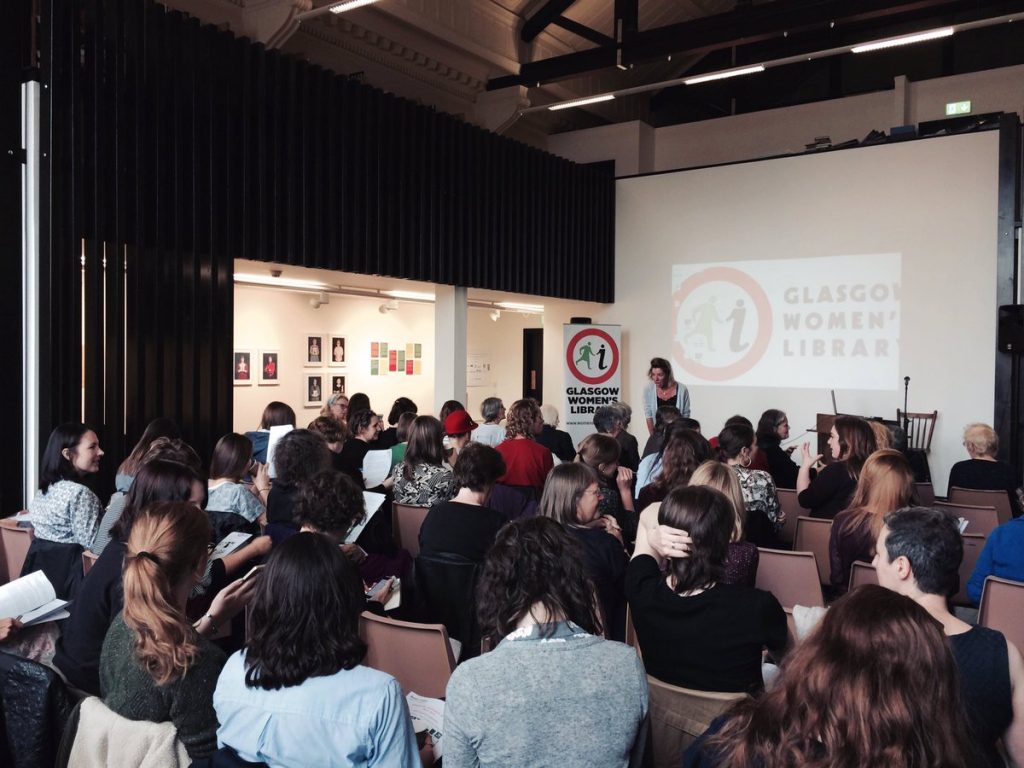 After an introduction to Women’s History Scotland delivered by convenor Alison McCall, Tanya Cheadle delivered a paper on the late nineteenth-century feminist and socialist activist, Bella Pearce. Tanya’s paper talked of the ‘uneasy relationship between socialism and feminism in the 1890s’, as feminist social reformers attempted to navigate labour parties that were ‘first and foremost a man’s party’. Pearce’s feminist activism contrasted, in a perhaps unique example, with her unconventional faith. She became a devout disciple of a Christian sexual mysticism organisation, the Brotherhood of New Life, whose founder espoused the doctrine that ‘by denying sexuality, Christianity becomes sterile’. Tanya’s paper provided a fascinating insight into the relationships, activism and faith of one feminist reformer in late nineteenth-century Scotland.

Jane Rendall was next to deliver her paper, exploring female friendly societies in Scotland, c.1789-1830 and ‘the principle of Mutual Support’. Jane began her talk by discussing the role of ritual-based, religious and philanthropic societies and their growth in this period. Interestingly, whilst Jane had detected 1560 male friendly societies, only 66 female equivalents were discovered. These female friendly societies were concentrated in South West Scotland and were noticeably absent from the urban centres where the strength and influence of male trade predominated. Despite the limited number of female friendly societies, Jane revealed how such organisations helped to consolidate neighbourhood ties, provide recognition of women’s identities and allow members of all classes new experiences and opportunities. 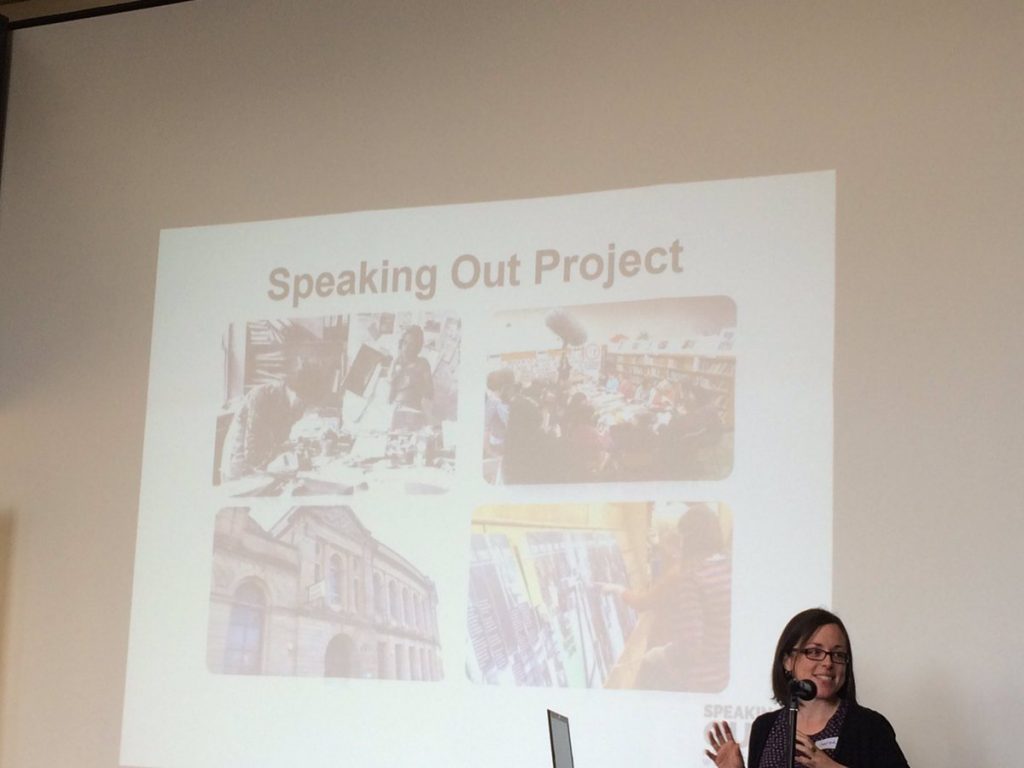 Sarah Browne of the ‘Speaking Out’ project presented the final paper of the ‘Activism’ panel, examining the links between feminism and Women’s Aid in the 1970s and 1980s. Women’s Aid, which campaigned to end domestic abuse and assisted women seeking to escape abusive partners, emerged out of and became a testimony to the Women’s Liberation Movement. Sarah talked of how attention to the ‘Herstory of Women’s Aid’ allowed for a reclamation of women’s pasts, whilst providing opportunities for reflection on what had been achieved and what still needed to be done. Sarah reinforced the central tenet of Women’s Aid and indeed feminism – that the abuse of women was (and still is) central to women’s unequal position within society. In concluding, Sarah emphasised that whilst Women’s Aid is ‘always moving forwards’, the organisation’s roots in the Women’s Liberation Movement will continue to be acknowledged.

Georgia Mackay opened up the second panel on ‘Material and Visual Culture’ with a wonderful paper on Doc Martens and feminism. Georgia pointed out that Cinderella teaches us that ‘one shoe can change your life’, yet asked what happened when women rejected ‘overtly sexual’ sky-high heels for ‘kick ass heavy boots’, the Doc Martens. In a paper that explored the links between fashion and feminist subculture, Georgia explored the history of Doc Martens, whilst reinforcing the idea that ‘any item of clothing can be feminist if intended so by the wearer’.

Nel Whiting concluded the morning session with a paper that applied feminist methodology to portraiture, unearthing the subtle gender dynamics of David Allan’s The Family of the Earl & Countess of Hopetoun. Nel’s application of gender theory and close analysis revealed implicit power relations contained within the portrait. Nel argued that artwork reflected and replicated contemporary values and thus formed a key part of society’s discursive network, thereby demonstrates how analysing portraiture can be of great use to the researcher of eighteenth-century gender relations.

The editors of the 2nd edition of the ‘Biographical Dictionary of Scottish Women’ gave an update on their progress after lunch, informing delegates that the volume will include 150 new entries of notable women throughout Scottish history.

In keeping with the theme of ‘Biographies’, Sarah Edwards delivered a paper on Dr Dorothy Meads, the principal of Bishop Otterly College. The paper included a history of the college itself, from teacher-training college to RAF base during World War II. Sarah talked about Dr Meads’ reforms and how she embodied the contemporary conceptualisation of female principal in this period – an amalgamation of feminine nurturer and masculine protector exhibiting quasi-parental control over the female students. 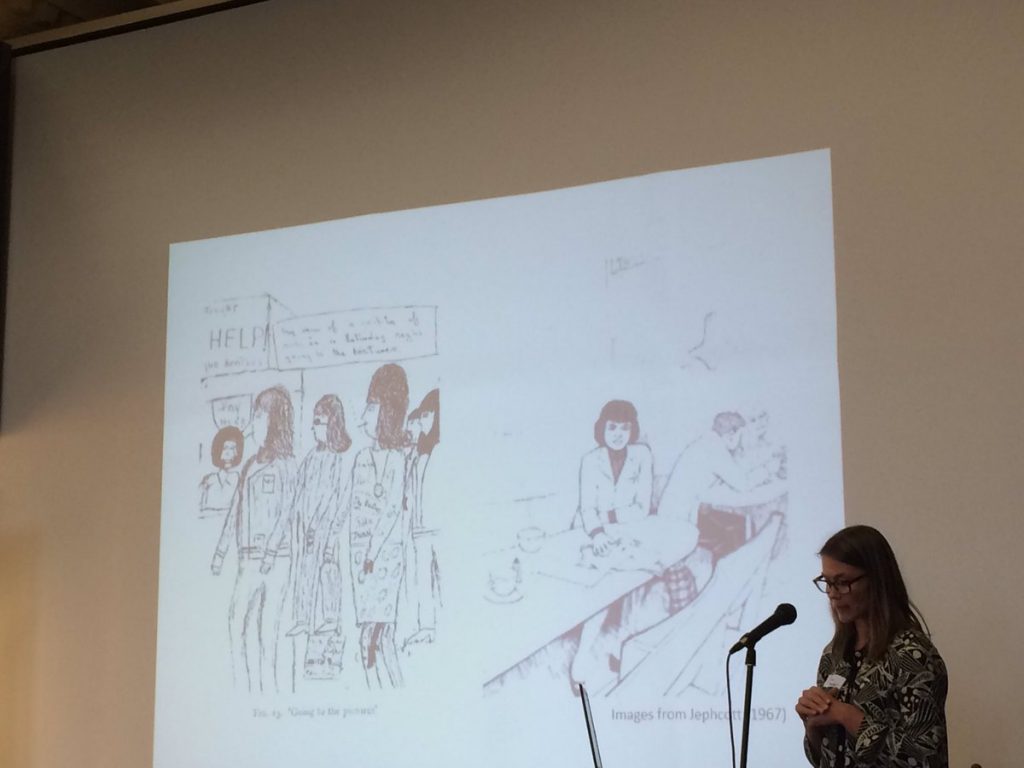 In the final paper of the day, Susan Batchelor presented an examination of the life and influence of Pearl Jephcott, whose pioneering sociological research privileged the experiences of ordinary young people in detailed and broad-ranging analyses. Susan showed how Jephcott utilised 1960s sociological approaches, yet also foreshadowed later developments, especially in the form of feminist epistemology in the 1980s. Susan concluded that ‘Jephcott was a sociology research pioneer, yet also a feminist research pioneer’. 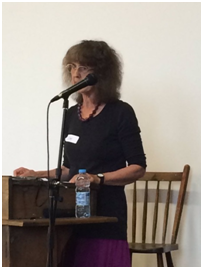 The annual Sue Innes Memorial Lecture was delivered by Zoe Fairbairns, who began her lecture by thanking those who have worked so hard to keep Sue Innes’ name alive. Zoe’s wonderful lecture explored ‘Five Decades, Five Feminisms’, demonstrating the many developments that have been made in the pursuit of gender equality. Zoe took the enraptured audience through each decade, from the 1960s when feminism was yet to be named, to the challenges of the new millennium – terrorism, anti-feminist backlashes, the dangers of the internet-age and the continued prevalence of violence against women and children. Despite the work still to be done, Zoe’s lecture was ultimately celebratory. She said that ‘I would say that a lot has changed for the better, and that we, as feminists, should congratulate ourselves for our part in that’. Zoe cited greater representation of women in politics, the successful introduction of equal marriage, women in well-paid employment and men engaging in domestic duties as examples of the many developments achieved through five decades of activism and feminism. To rousing applause, Zoe concluded her lecture, and the WHS annual conference, using Sue Innes’ own words – ‘let’s go on making it work’.

Sarah Browne, Heritage Project Co-ordinator, Scottish Women’s Aid – ‘Pledging our support to the seven demands of the Women’s Liberation Movement’: Feminism and the emergence of Women’s Aid in the 1970s and 1980s – brownewhspresentation

Georgia Mackay, University of Glasgow – The End of High Heels? Doc Martens and Feminism in the late 20th Century – the-end-of-high-heels

Sarah Edwards, University of Strathclyde – Dr Meads and her wartime flock: the history and representation of Bishop Otter College at Bromley, 1942-45

Susan Batchelor, University of Glasgow – Pearl Jephcott and a Time of One’s Own – revisiting-jephcott-whs-conference-sb-080916