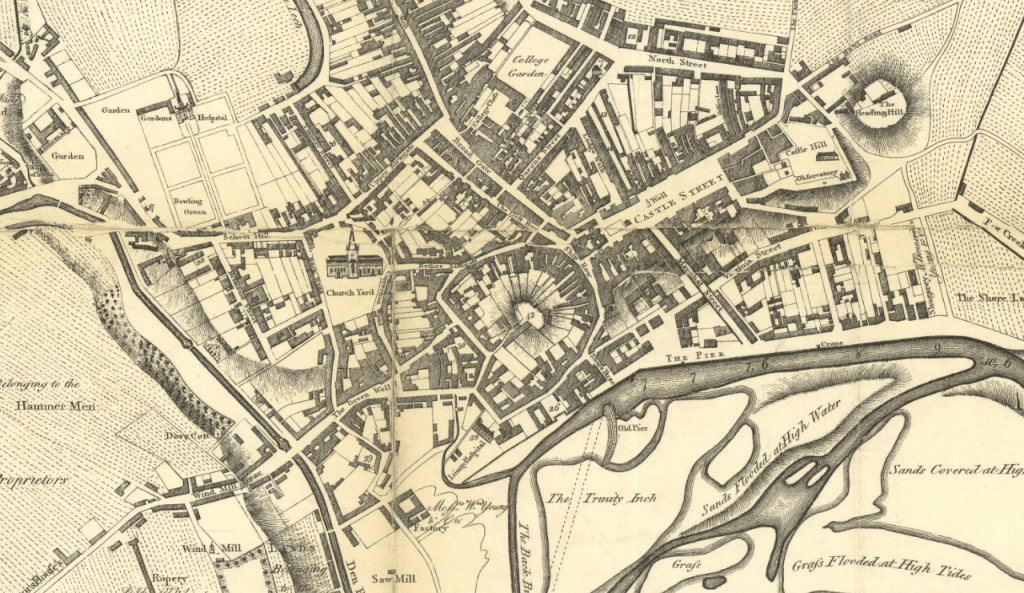 Detail from:  Milne, Alexander, fl. 1789-1818, ‘A plan of the City of Aberdeen with all the inclosures surrounding the town to the adjacent country, from a survey taken 1789’, http://maps.nls.uk/towns/rec/311.  ©National Library of Scotland

I ‘met’ Margaret Morice in 1998. I had just finished writing A History of European Women’s Work.[1]↩ Needing to get into some real primary research and since I was working at Aberdeen University, I asked myself the fairly simple question, ‘What kind of work were women doing in eighteenth-century Aberdeen?’ It was provoked by a number of factors, curiosity not being the least of them.

One of the first steps was a visit to Aberdeen City Archives, one of the best in Scotland. The initial visit was a bit demoralising, because the staff could only suggest the usual finding aids. Undeterred, I trundled through these and found the Register of Apprentices. This produced the first surprise, and was where I first found Margaret. The surprise was that with the exception of one entry for another female baker, she was the only one recorded—but in regular entries, between 1776 and 1797 she traded as ‘Margaret Morice and Co., baker in Aberdeen’.[2]↩ This is notable on a number of levels. The bakers along with the weavers were seen as the most prestigious of the seven Incorporated Trades in Aberdeen and as their historian insisted:

Notably in Aberdeen, the baking of loaf and biscuit bread has been preserved as a strict monopoly for the men bakers. According to the acts and ordinances of the Baker craft in Aberdeen, women were not allowed to bake any bread, pastry, or pies to be sold in the streets or chops, a restriction that was maintained until the abolition of trading privileges in 1846.[3]↩

She also traded using her married name, when most Scots women kept their family name. She did so, I believe, because it furthered her commercial position as a widow.

Her husband had not been recorded in the Aberdeen Register of Apprentices, which misled me until I discovered that his were recorded in the Inland Revenue Apprenticeship Registers. She, in contrast, appeared only once at Inland Revenue; all of her apprentices followed his death.[4]↩ As a relatively prominent member of the Incorporated Trades, and their Council representative from time to time, he would have paid the stamp duty and ensure that his apprentices were properly recorded. On the one occasion when she did, she had just ended a partnership with a previous apprentice. (She twice entered into such a partnership.) Thus a ‘properly’ registered apprentice may have been essential to retaining the prestige of the business. Over the 30 years that she ran the business herself, she apprenticed 16 boys from the tradesman classes (compared with John’s 12 over 25 years). The apprentice fee and the boys’ terms of service compared well with those for male bakers, including John’s, in Aberdeen, Essex, Birmingham and Staffordshire.[5]↩

This discovery sent me on a trail, which I followed alongside other research on Gender in European Towns.[6]↩ In fact, I became addicted to finding Margaret Morice. Since there was little business information available in the archives, I turned to the parish records of births, deaths and marriages, available on microfilm in the Local Studies section of the Public Library. Here I found her birth in 1710 (though there is some doubt) and the birth of her seven children, including twins, beginning in 1739 and ending in 1750. Through serendipity, tucked in the back of the Council records, I found a notice of John’s burial in January of 1770, when she was 52. These also noted the death of a ‘child of John Morice’ on a couple of occasions. Thinking laterally, I tried Ancestry.com, and found the death of four of the children at very young ages. The eldest, David, and the female twin, Barbara, have a bigger part to play in her story. The seventh is still AWOL.

Trying a different line of enquiry, I went to the National Archives of Scotland (now National Records of Scotland), hoping for a will or inventory—no luck. I did however find window and inhabited house tax lists, showing her to have paid these through much of the same period that she was taking apprentices. Council Enactment Books added snippets here and there, mostly about John, but clarified that the bakery was well-established, that they owned the property from 1752 and that he was gradually building up a business and political persona. I felt I was coming closer to ‘seeing’ her, but frustratingly still with a great deal of speculation on my side. Through various venues, and thinking outside the box from time to time, gradually her story was becoming more and more visible—but still with gaps and a sense of incompleteness.

A return visit to the Archives, delayed by my move to Denmark, and assisted greatly by a Strathmartine Trust grant, turned out to be an epiphanic experience.[7]↩ On arrival, Fiona Musk, the archivist, simply asked what I was trying to do. Not very optimistically, I told her, and then said flippantly, ‘What I would really like to do is find Margaret Morice’, literally locate her in the town. I knew roughly where the business was but her response, ‘I am sure I have seen her name on a map’, was astonishing after sixteen years of looking. A couple of hours later, she left the search room and returned with a bundle, and there was Margaret, on the plans for the ‘New Street‘ (now Union Street)—in one of the houses to be demolished.[8]↩ And now, I confess, I did a dance in the record office to the amusement of the other four people in the room. 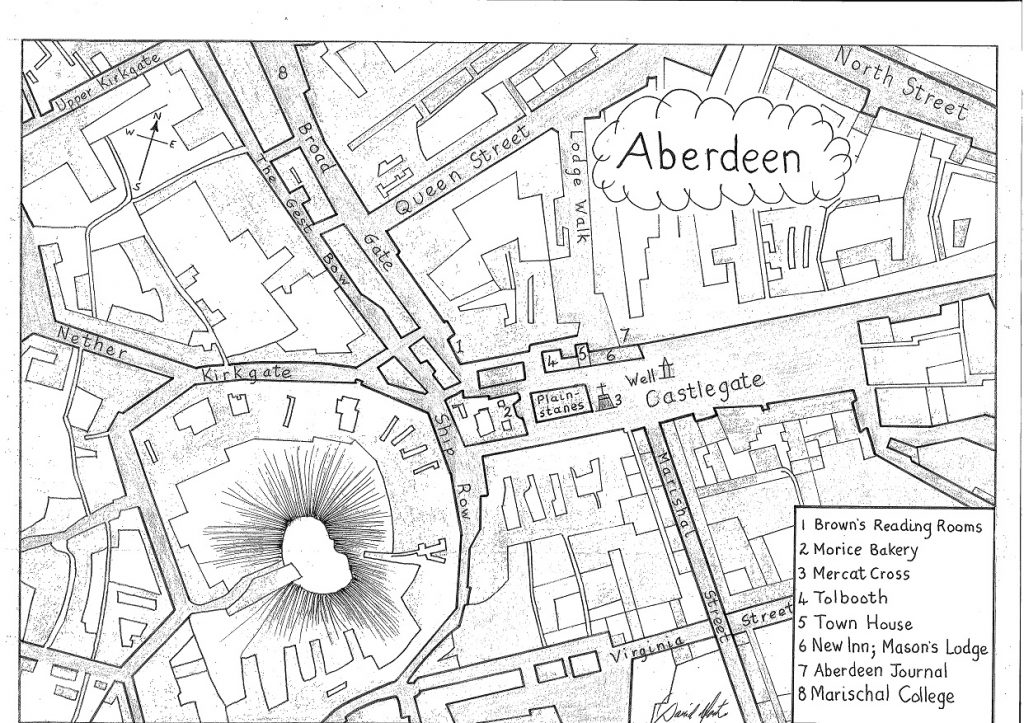 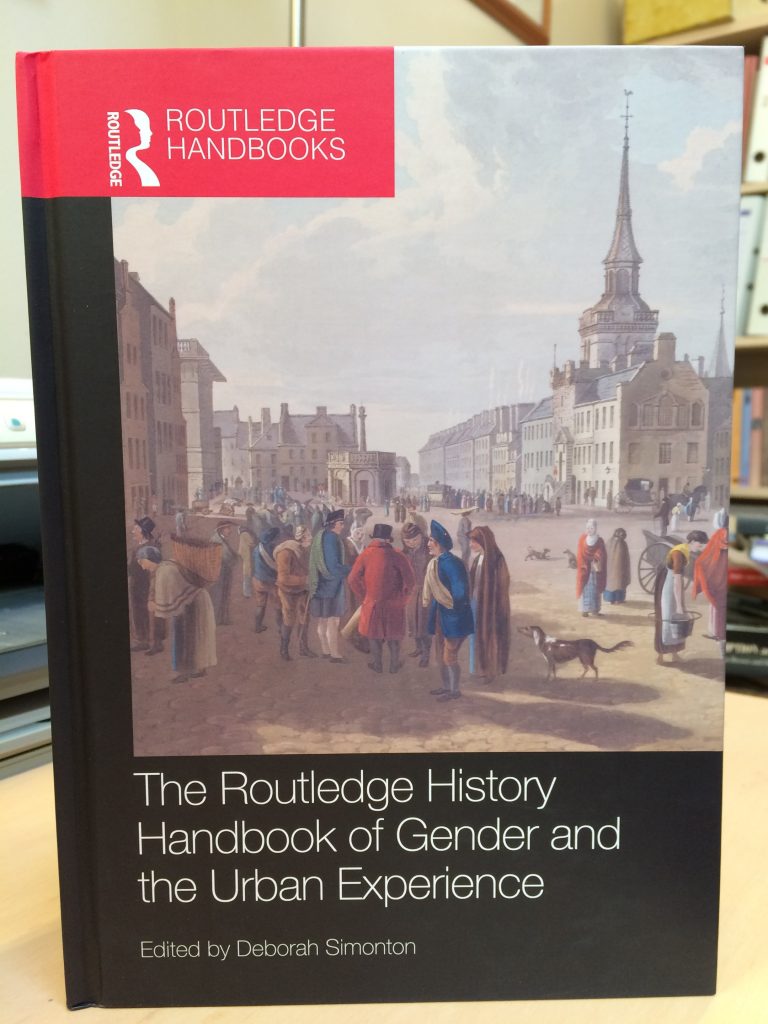 Furthermore, Fiona pulled up the records of saisine, which previously I had been told would be useless, to unfold the story of the property from John’s purchase to its sale to the Council in 1800. At first perplexed as to who the sellers were, two boys named Abercrombie, through antiquarian books in the Record Office, we identified that they were her grandsons, sons of her daughter Barbara, the second wife of an esteemed clergyman. This bundle corroborated and clarified the narrative of David’s bankruptcy and Margaret’s right to the property.[9]↩ I had simultaneously been trying to read the whole of the Aberdeen Journal for the period, and there, in a notice she placed in 1789, I found her ‘voice’ for the first and only time, ensuring that none of David’s debts were charged to her and asserting her role as baker in Aberdeen.[10]↩ All other mentions of her in the press had been oblique: a partner announcing the end of a partnership, her son asking for a lease for his mother, lawyers asserting her claim to the property. There are other small trails to follow up still, but from piecing together an array of disparate records, we can create a picture of her business, which was clearly long-standing and central to the commercial area of Aberdeen. It was also tolerated by the guild and held its own until near her death. Stories of such women are the bread and butter of our research, they whet our curiosity and through them we see the lives of towns come alive. This tale is not finished, and I intend now to develop it further and use this example with others with less detail to explore how businesses such as this inflect the character of eighteenth-century towns.

This tale of discovery probably replicates many other searches and journeys that other historians make. Our curiosity leads us on, we get ‘addicted’ to finding some answers, not all of which are terribly important. Perseverance and asking the same question, or similar ones, over and over, of the records, or of tangential material and of librarians and archivists is our stock in trade. In an age that prioritises publication—and publication of a particularly designated sort—we must not lose the curiosity and love of the past that drives us; we need to hang on to the wonder and joy of discovery—even with a little dance or two. And we need to keep using our skills, training and insight to solve these little mysteries; they can help solve the big ones.

[6] Gender in the European Town, www.sdu.dk/geneton↩