In this guest post author and former GP Anne Pettigrew follows the opportunities for autonomy experienced by the last four generations of women in her family. As she suggests ‘We accepted the norm of chauvinism and #MeToo at work. This generation must not’.

Self-determination, education, opportunity and respect are all essential for the advancement of women. But while education and opportunities have improved, equality and respect are not yet within grasp. Gender studies can observe societal changes over the last century wrought by Maternity and Equal Opportunities Laws and the feminist battles over suffrage or reproductive rights, but poignant realism can be added to knowledge by recording the personal experience of women within families like my own. My Scottish grandmother had to accept being kept at home until marriage. My mother escaped home to become a London Civil Servant, though had to resign on marriage. I had the luxury of grant-aided University, a professional life as a doctor throughout my marriage and became an author in retirement. My daughter has two degrees and has travelled the world with NGOs advancing the cause of education and girl’s rights. Women have made progress.

My grandmother, Annie Paton, born 1893, was taken out of school at 12 despite her headmaster’s protestations when her mother became invalided by a stroke. Her father required her to care for her six siblings.  I remember how sharp she was at arithmetic and frustrated at her lot. Falling (in more ways than one) for a naval Policeman, she did marry and leave home, but never had a paid job. She sewed and supported families impoverished by alcoholism near her stone cottage in Rosyth, becoming a staunch ‘Recheabite’ campaigning against ‘liquor.’ Her cottage had no running water, her second child, Maisie, never spoke and died at age 4, damaged by a drunk doctor with ill-applied forceps.  As was she: an emergency hysterectomy left her with severe osteoporosis, spinal pain and a premature death in the days before HRT. We have never seen Maisie’s face, cut out of all old photos by my grieving gran. There was no recourse, no Legal Aid for Annie.

But her first daughter, my mother Agnes Bell, born 1920, managed school until 15. Further education was financially impossible. Hearing of exams for the Civil Service while working in a shop, she took Pitman evening classes, passed the tests and set off for London, aged 17: a very bold move in those days. The National Savings Bank provided hostels for girls though curfew was strict: 10.30! Her father’s illness caused her to return home during the War when she met my father, a merchant Navy Captain.  Marrying in 1943, she had to resign from the Civil Service: married women were not employed.

I was born in 1950 into a household believing girls can do anything. I recall my mother’s anger at the school gates when a classmate’s mother asserted women’s education wasn’t as important as boys’ since they would marry. And an English teacher who thought it best we became teachers, so we’d be home in time to make our men’s tea -and be available for childcare in the holidays. He scoffed my idea of medicine; ludicrous for a girl! Even at Med school interview there was some disquiet: did I realise it was a long haul for a girl?Surely 6 years was a long haul for anyone?

In the Sixties, women formed only 34% of the med school intake at Glasgow. Chauvinism was around. Few female mentors or role models existed. Or female surgeons. Even after maternity leave legislation, women were pressurised to leave. Part-time work was rare in hospitals. And there was the odd Weinstein… silently accepted. Once asking for a reference, I was told ‘Well, you had several medals, didn’t you? I suppose you are a girl who should be given a chance.’ The inference was that other girls didn’t merit one… Even as a fully qualified GP(albeit the only one in the area) , at a first professional lunch I met a silver-haired male GP who looked me up and down as if appraising cattle. ‘Are you pregnant?’ My denial was countered by ‘Pity. In my view women have no place in medicine, they are best pregnant, barefoot and in the kitchen.’  I was lucky over the years with my own partners, unlike many exploited girls whom I met in the 90s when running a women patients’ and doctors’ support group. They often accepted poor pay and limited duties to secure a job.

Today fathers may not take girls like my grandmother out of school as nursemaids, nor employers prevent married women like my mother from working. And surely there must be less barefoot women jibes? But the patriarchy persists. In 2016 58% of UK medical entrants were female, yet only 11.1% of surgeons were women. They are still vastly unrepresented in the upper echelons of medicine- though that is changing. Slowly. In General Practice however, there remains a marked pay discrepancy: only 40% of GP partners are female while 68% of lower paid salaried doctors are.1

There is no point in allowing women into specialist careers without a sea change of attitude to consider all applicants equally. I know of current medical consultant candidates appointed over better qualified women. This history blog and others should be active in showing younger women past problems of societal/male prejudice and girls’ acceptance of such- and exhort them to perceive themselves differently, to think and act positively and fearlessly and change the deep-set doxa that women are inferior and incapable of male-dominated occupations like STEM careers. For posterity I’ve even written a wry novel showing women surviving medicine in the 70s- no pill, no Google, no equal opportunities.2 We now have reproductive control, the worldwide web at our fingertips and opportunities to get in there. The only barrier to success is persisting societal attitude and assumptions that girls can’t do everything. They can.

2Pettigrew, A., Not The Life Imagined, 2018, Ringwood Publishing 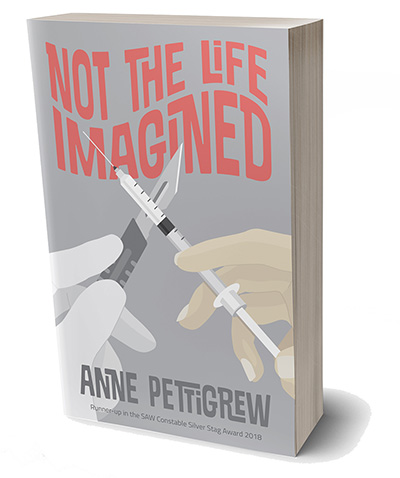 Anne Pettigrew is a retired GP with degrees from Glasgow (MBChB Women’s Graduate Prize 1974) and Oxford (MSc Medical Anthropology 2004). She worked as a GP for 31 years in Greenock and also worked in Psychiatry and Women’s Health, as a BMA media spokesperson and as a Herald and Doctor Newspaper columnist. In retirement she took Creative Writing Classes at the University of Glasgow aiming to pen novels about women doctors – largely unrepresented in literature unless as pathologists or in Mills and Boon.

Not the Life Imagined, her debut novel highlighting discrimination and changing social and sexual mores in the sixties, was runner-up in the Scottish Association of Writers’ Constable Silver Stag Award 2018 and is published by Ringwood Publishing, Glasgow. Some of her award-winning short stories and articles can be found in Greenock Writer’s Club’s 50th Anniversary Anthology. She lives in North Ayrshire with her husband.

The profits from Not The life Imagined will benefit Plan International in their aim to reduce the 130 million girls worldwide who are currently denied education thereby improving girls’ lives. Her daughter Susanna was, until recently, External Engagement Manager, Advocacy and Campaigns for Plan International.