Stewart Park, Hilton, Aberdeen is not one of Aberdeen’s showcase public parks. Opened in 1894 it has become run down. Aberdeen Women’s Alliance proposed to create information boards in Stewart Park which would both enhance the park and include some women’s history on each board. These are all now in situ, and I walked round them on Saturday.

Board One covers the history of Hilton Quarries, which were adjacent to Stewart Park.  It also includes the story of Isabella Knowles, a local woman who disguised herself and worked as a man. She was arrested after hiding some stolen property in Hilton Quarry. 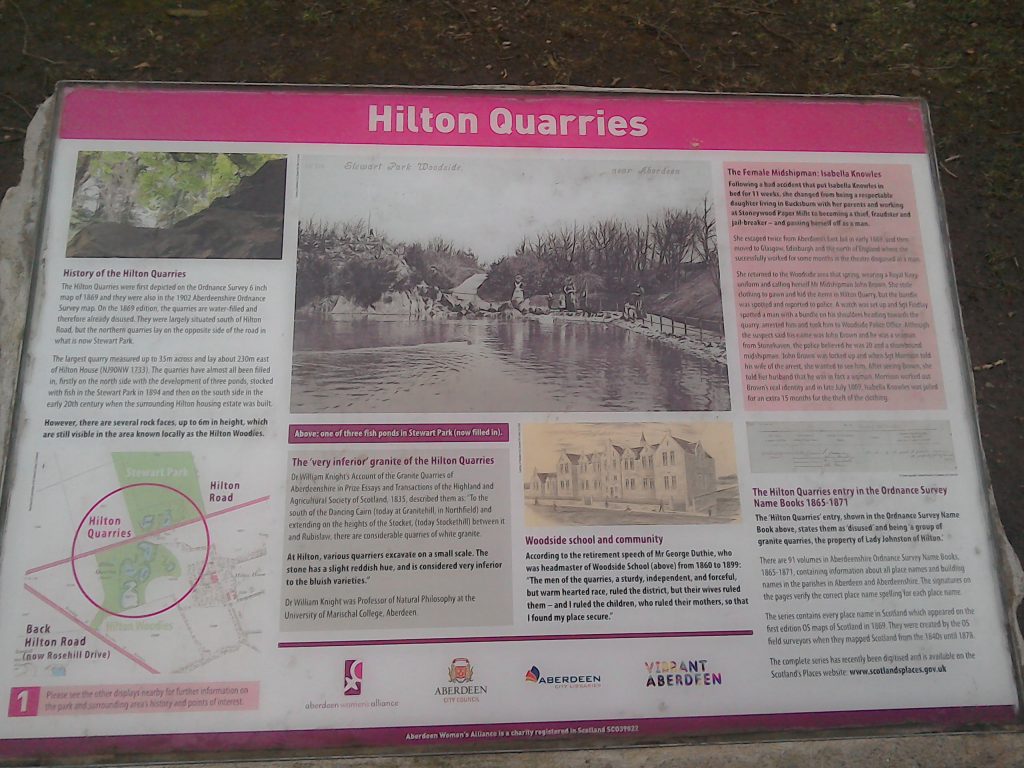 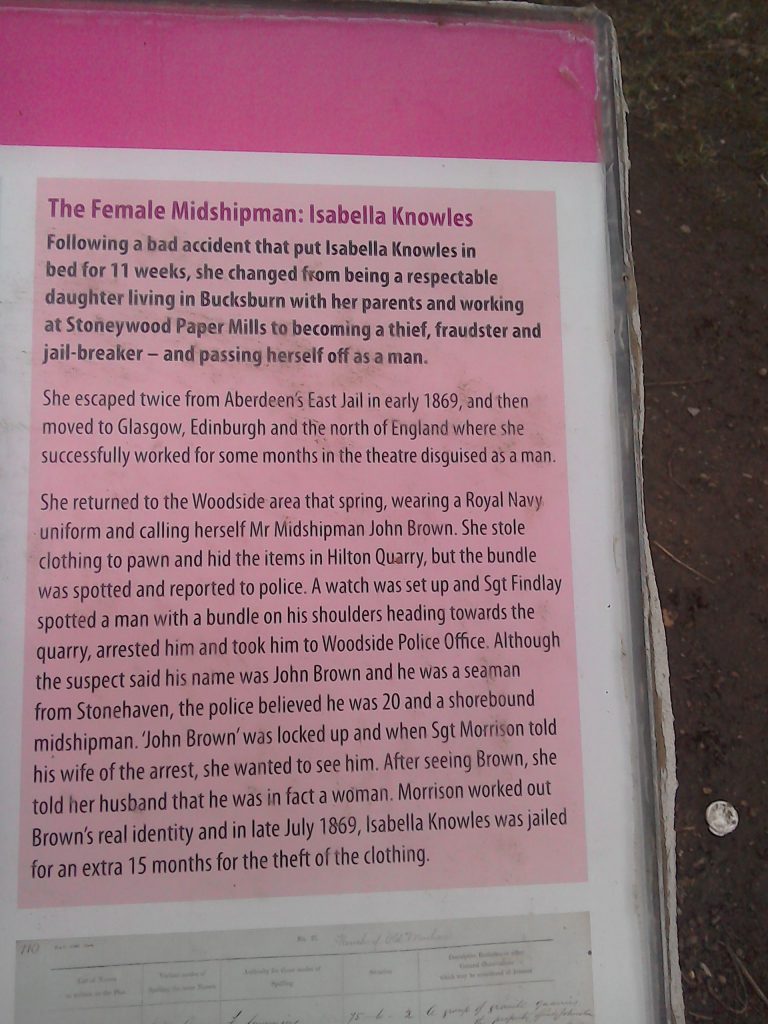 One of the features of Stewart Park is the set of whale’s jaw bones, which have been there since 1903. Board Two highlights Margaret Penny, who grew up in Hilton. She married Captain William Penny and accompanied him to the Arctic in 1857 /58, becoming the first European woman to visit Baffin Island. Her journal of the voyage remains a valuable resource for historians. 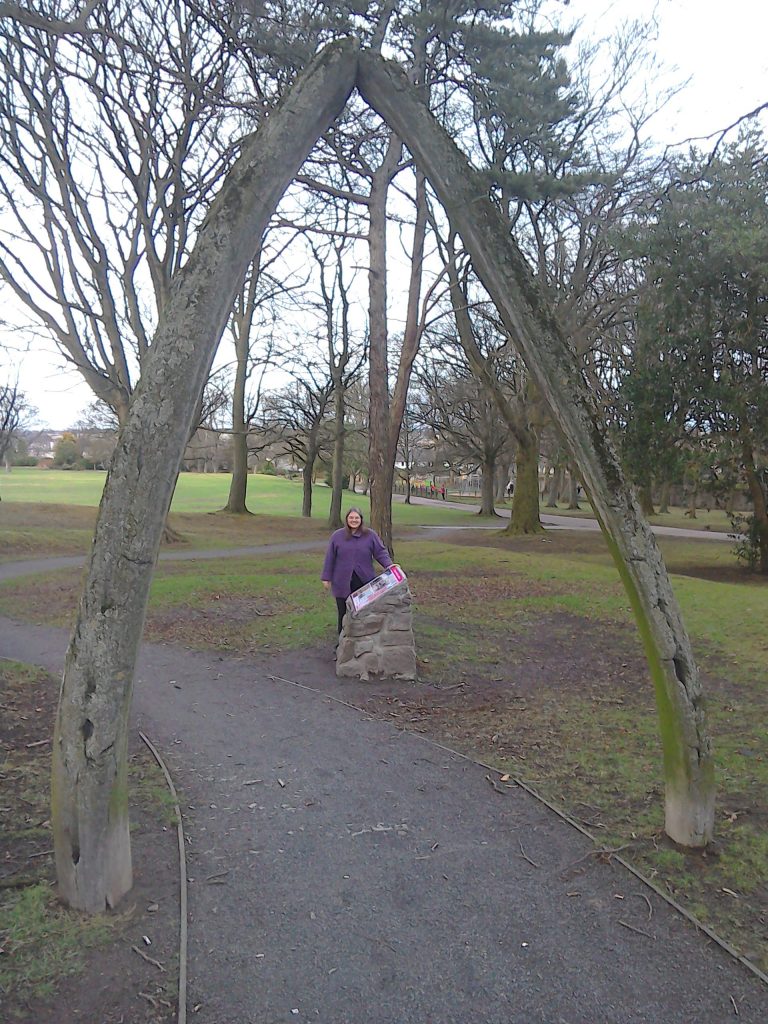 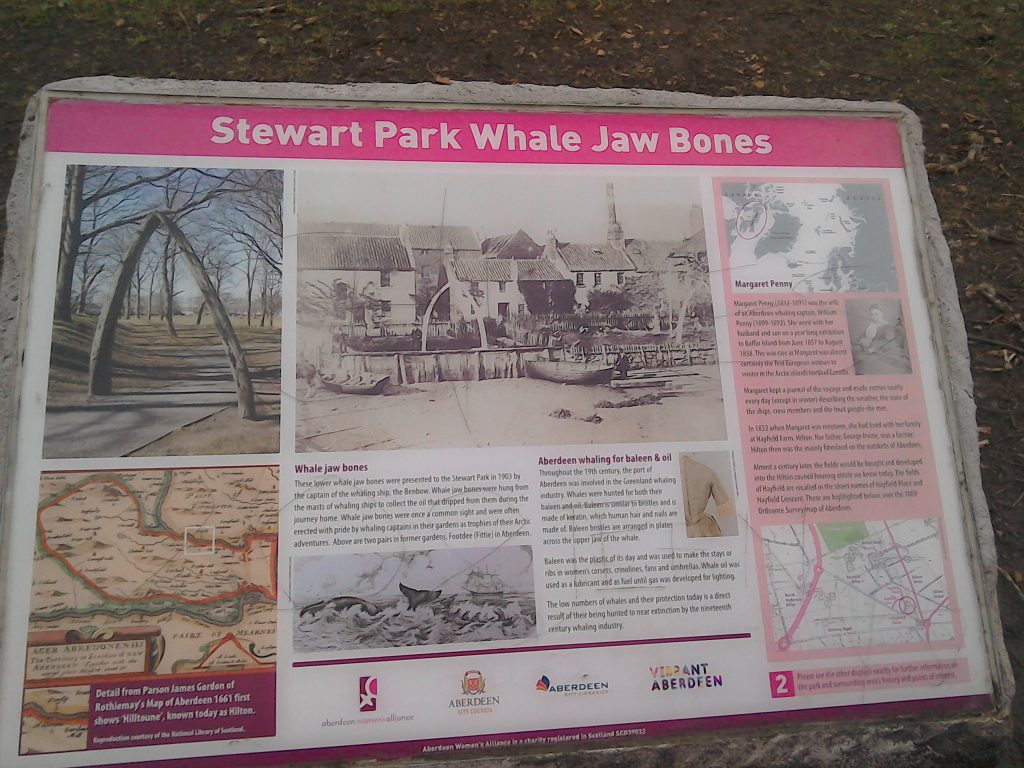 Board Three describes the former Hilton House which was demolished in 1926. I was asked to check the census returns for Hilton House in the hope that one of its female inhabitants might prove interesting. Imagine my delight when I found 5 year old Inez Ferguson living there in 1901. Ferguson was a suffragist. The second cousin of Millicent Garret Fawcett, she worked with her in the National Union of Women’s Suffrage Societies (NUWSS). Moreover, Ferguson’s aunt, Jane C Barker, served with the Scottish Women’s Hospitals in Serbia during the First World War. Ferguson herself became Assistant Director of the Women’s Land Army during the Second World War. Researching Inez Ferguson for Board 3 and finding a hitherto unsuspected seam of women’s history  in a corner of Aberdeen was a real thrill, and seeing her story on Board Three was deeply satisfying. (I was not on the committee for the Stewart Park project and all research other than Inez Ferguson was done by other members of AWA.) 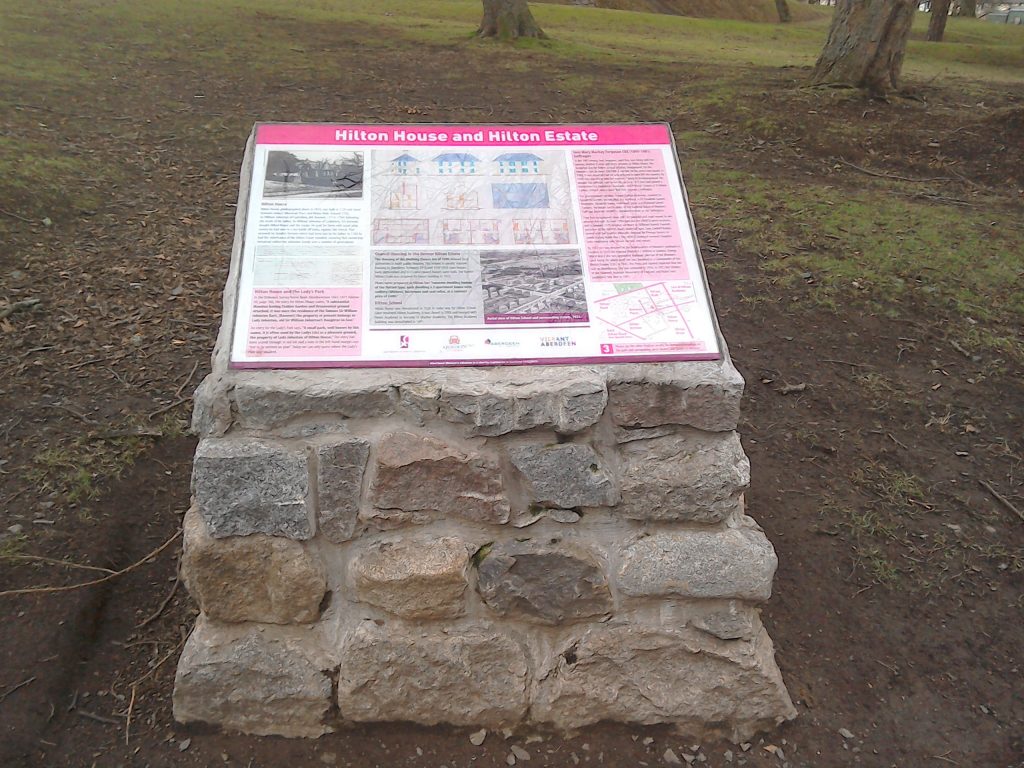 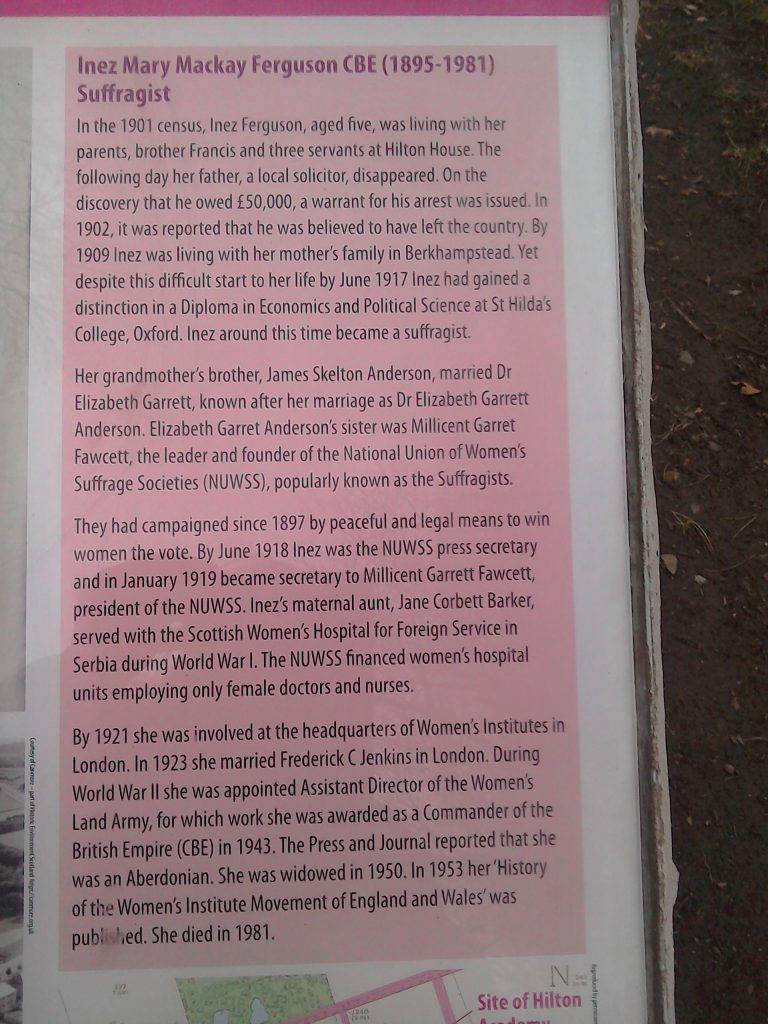 Stewart Park owes its existence to a legacy from grocer Mrs Jean Taylor, and this is described on Board Four.  The fountain dedicated to Mrs Taylor is on the Mapping Memorials site http://womenofscotland.org.uk/memorials/well-or-fountain-stewart-park-aberdeen 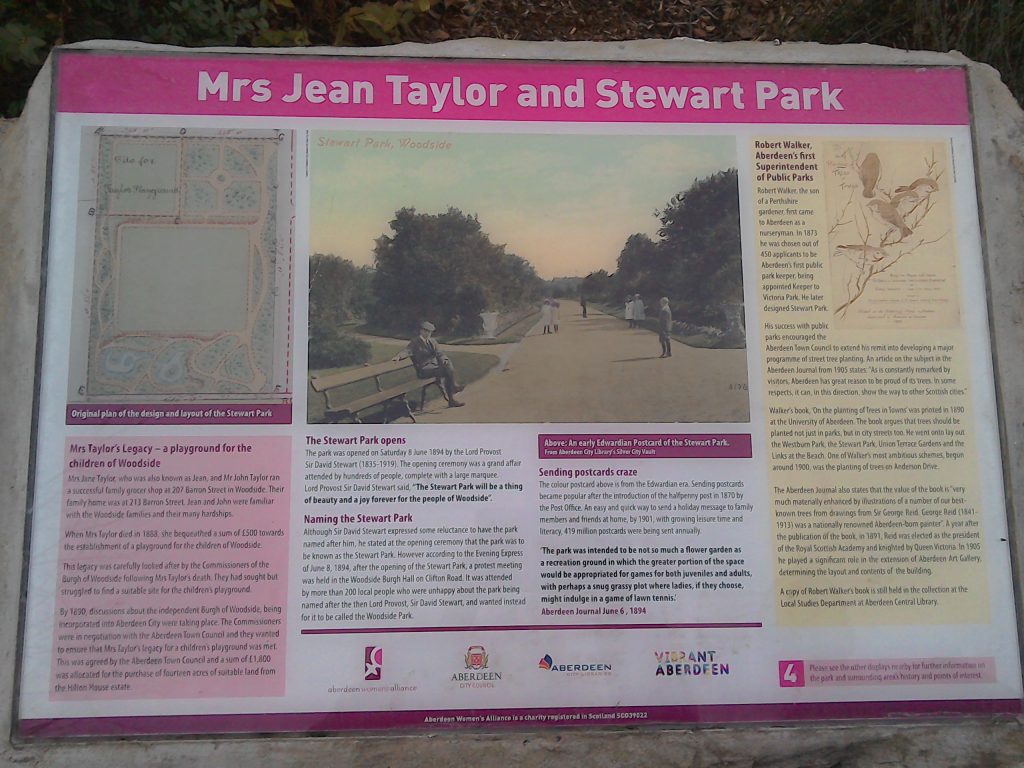 Board Five features the later history of the Hilton area, including damage suffered during the Aberdeen blitz. It highlights Margaret Beedie who worked in Hut 7, Bletchley Park, operating the Hollerith machine. After the war Beedie taught at Hilton Academy for over twenty years. 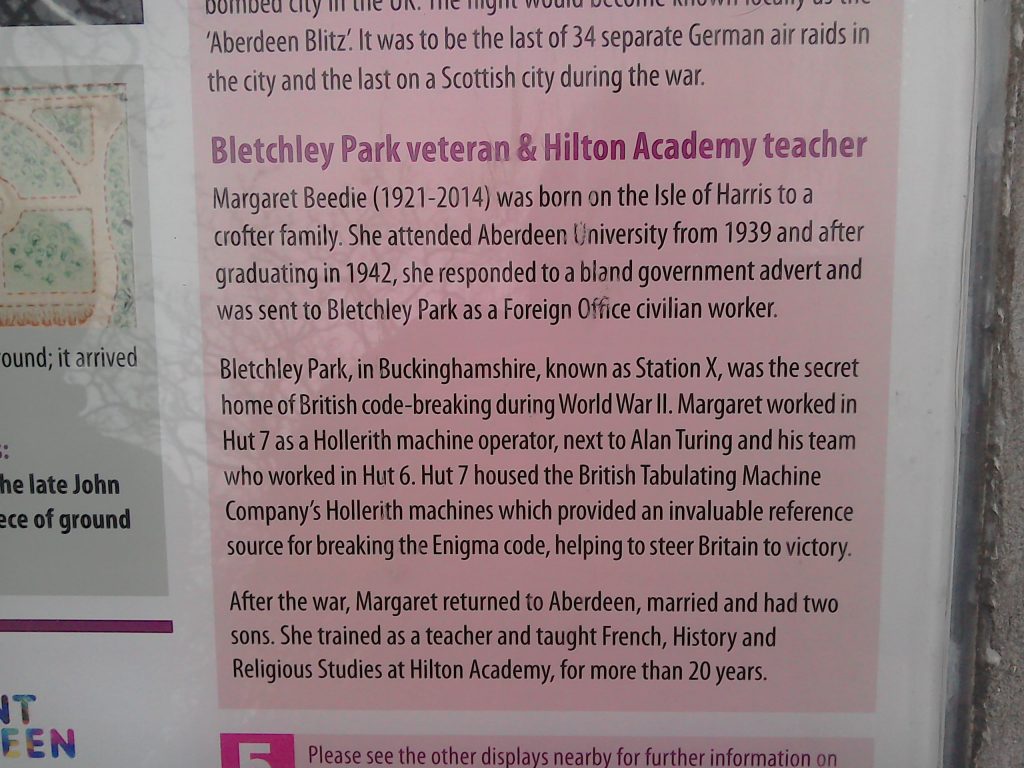 However, the variety of women’s stories told within the context of Stewart Park, stories which are of real interest to the general public and which will hopefully inspire girls from the area, has been revelatory.