“to wipe ma haunds” – and she made a graceful gesture over her shoulder with a fine pair, full in the palm and slender in the fingers – perfect pictures.

In 1843, David Octavius Hill and Robert Adamson formed one of the world’s first photographic studios, ‘Rock House’, in Edinburgh. Standing in the slipstream of the Scottish Enlightenment, Hill and Adamson produced some of the earliest and most celebrated photographic portraits.

These images are central to my PhD research on women in early Scottish photography. Within Hill and Adamson’s foundational collections is the absent-presence of a certain Jessie Mann. Coating the surfaces with sliver nitrate, Mann was a key figure in the production process at Rock House. In a letter to Hill, dated March 1847, painter and engineer James Nasmyth refers to the “thrice worthy Miss Mann, that most skillful and zealous of assistants” (Simpson 2010, 42). Yet she could not be more peripheral in our historical understanding of these works.

Her invisible, labouring hands form part of my current research on women’s role during the invention of photography; women who worked as practitioners, assistants and as subjects. My practice-based thesis offers a response to the silencing of women and their untold roles in 19th century photography in Scotland.

In April 2018, the Women’s History Scotland Research Bursary enabled me to undertake research in my home town of Edinburgh.

At the heart of my PhD project are the famous calotypes of the fisherwomen (‘fishwives’) of 1840s Newhaven, Edinburgh. Often, these women were subsequently catalogued as ‘Newhaven Beauties’ or as ‘A Love Reverie’, and such practices continue today. Their names? Elizabeth Johnstone Hall, Annie Linton and Jeanie Wilson.

Over the course of 4 days, I was taught how to make a photographic calotype by Rob Douglas (no relation). We worked closely with William Henry Fox Talbot’s nineteenth century invention of the paper negative. Douglas’ training was incredibly attentive to my research. For example, I was shown not only Talbot’s pioneering techniques, but also Dr John Adamson’s (Robert’s brother) modifications to Talbot’s 1839 invention. We were, in essence, retracing the revolutionary developments of nineteenth century photography, from Lacock to Edinburgh, via St Andrews. 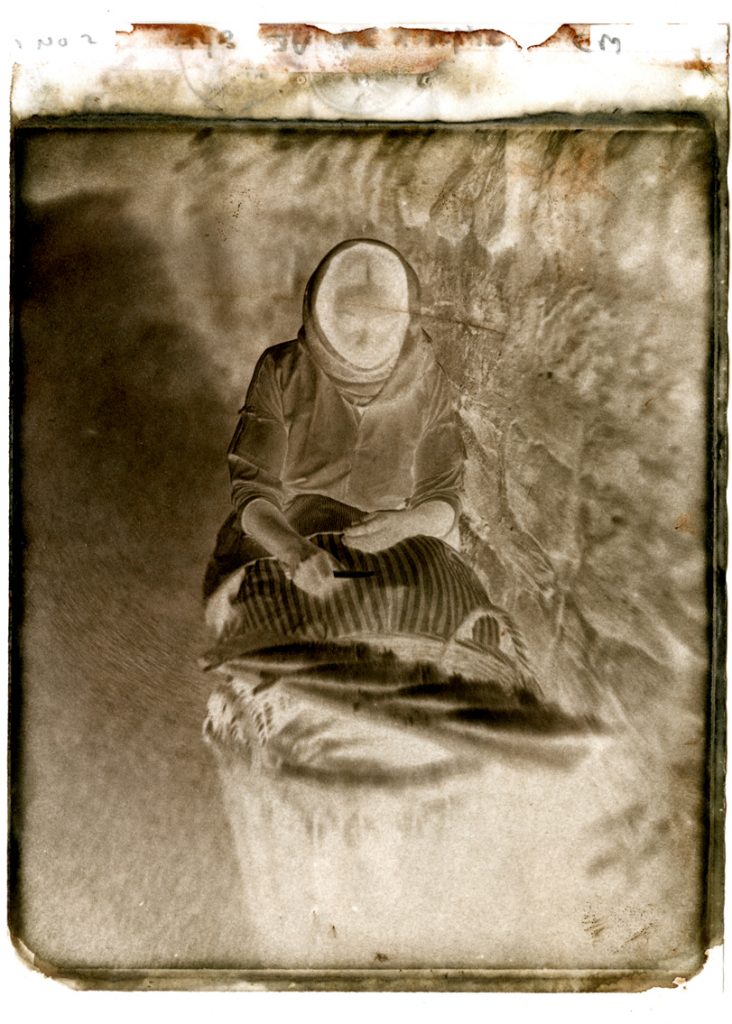 Together with Rob Douglas, I studied how to prepare, iodize and sensitize paper; measure and mix chemicals; calculate exposures; develop; fix….it was a haptic, lengthy and at times quite physical process.

It was important for me to embody multiple positionalitites throughout the process. I shot calotypes (Adamson); sat for portraits (‘Fishwife’); directed the shot (Hill) and assisted the photographer (Mann). More than anything, these durational processes revealed just how collaborative the making of a calotype really is.

Our calotypes were made on ‘Fishwives’ Causeway’, just yards from my childhood home. Never did I expect this path to prove so fruitful for my doctoral research. I used to walk through this lane every school day for six years with Alexandra Nelson, my childhood ‘chum’. Twenty years later, through a process of re-enactment, we dressed in clothing generously loaned from the City Art Centre and were photographed together as ‘fishwives’.

It was odd, humorous and, for me at least, profound. Props were positioned, staged, and precariously placed for minute-long exposures. Photoshoots were quickly followed by the sound of my mum’s car pulling in to the lane. She would drive us, latent calotypes in hand, to the darkrooms to develop the images. All in all, it took a handful of people plus a vehicle to make this work. I left Edinburgh with even more admiration for Hill, Adamson and Mann. The experience confirmed in my mind that we should see the fisherwomen as active agents in the production process; collaborators, even, in the making of the calotype portrait.

My 4 days in Edinburgh raised more questions than it answered. The next stage is to move beyond a romantic reenactment, and develop a more critical engagement with these works.

Meanwhile, the smell of ammonia and gutted fish still lingers.

Thank you for the generosity and support from the Scottish Women’s History Bursary and AHRC TECHNE consortium for making this research possible. Thanks to Rob Douglas for your patience and attentive tutoring. And to Roddy Simpson, who first led me to Miss Mann.

Later this month, a Kickstarter project will be launched to raise funds to restore the grave stone of Miss Jessie Mann, and for the creation of a commemorative plaque. Details will be released soon. Check @caddydouglas for updates.

My PhD on women in early Scottish photography has just taken an exciting turn: using Fox Talbot's C19th methods, I've made my first calotype from *start to finish*. Taken on 'Fishwives' Causeway, Edinburgh, May 2018. pic.twitter.com/7p4Gyt3UkK