I’m sure anyone reading this who has followed the news over the past few weeks will be neither shocked nor surprised at the latest revelations of how patriarchal power has enabled men to sexually harass and assault women. We all know that such behaviour doesn’t just happen in Hollywood, the acting, entertainment professions or in Westminster and the Scottish Parliament. While the feminist and women’s movements have done much to shine a light and challenge such behaviour, as Zoe Fairbairns powerfully argued in last year’s Sue Innes Memorial Lecture, ‘Five Decades, Five Feminisms’, still it persists.

But what does this have to do with women’s and gender history in Scotland?

Well unsurprisingly sexual harassment and discrimination is nothing new for Scottish women, or women anywhere. But we can learn lessons from the agency and courage that women in the past had in challenging sexist attitudes and harassment.

Here I’ll be discussing the ‘Extraordinary Slander Case’[1] that Marjory Panton, a 21 year old weaver, brought against David Craig, Assistant Mill Manager at Baxter’s Dens Works in Dundee. She took him to court seeking £500 in damages (about £41,000 in today’s money). 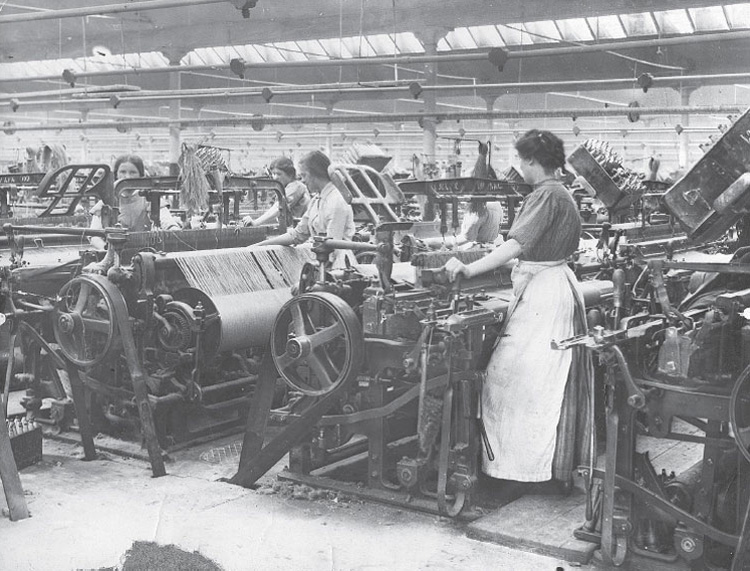 First a bit of context. Dundee is known as a ‘Women’s Town’ as a result of the high proportion of women who worked in the city’s jute mills.[2]The largely female workforce had agency in withdrawing their labour if unhappy with their conditions.[3] If a woman was unhappy in one mill, she could easily find a job in another. Women’s work was very much in demand. This did not mean that they were paid well. Weavers were paid more than spinners, a distinction that became linked to notions of respectability with weavers wearing hats and gloves to work. Spinners thought the weavers were were ‘snobbish’.[4] But it’s worth underlining that no women working in jute earned the same as the male mill owners,  the male overseers, managers or workers. Regardless of the number of women workers, jute remained a patriarchal capitalist industry. Men made not only made more money but they had more power.

On the 10th of November 1892 Marjory sprained her foot on the stairs at work and spent eight days recovering at home and received treatment from her doctor. Three days after returning to work, David Steedman, a foreman working under Craig, ‘spoke to her about her health’ asking:

‘Don’t you think you are growing rather stout?, I do not think so myself but David Craig has been taking stock of you for a while’.

According to The Evening Telegraph Marjory ‘spoke to the defender the same day about the matter’. His response was to suggest that she was ‘uncommonly stout for her age’ and suggested that ‘her best plan’ would be to ‘get a line from her doctor certifying that she was not in a state of pregnancy’.

Marjory evidently went to see her doctor, Dr Miller, who informed her

‘that neither the defender nor any other man was entitled to get from her such a certificate’.

Instead he gave her a certificate to the effect that he had attended her while suffering from a sprained ankle. This was given to Steedman, who passed it to Craig. This was later returned to Marjory with ‘the remark that it was not what was wanted’.

All of Craig’s comments and requests were presumably made in full view of Marjory’s work colleagues, or she was concerned about gossip, as she argued in court that Craig’s

‘remarks and demand for a certificate as to her condition were all intended to insult and slander her and lower her in the eyes of her fellow workers’.

She accused Craig of making allegations that were ‘false and caluminious’ which were made ‘maliciously and without probable cause’. It was suggested that Marjory’s ‘feelings, character and health had in consequence had been injured’. No wonder!

Marjory demanded that Craig ‘make reparation’ but he had refused. He denied the accusations suggesting that neither he or Steedman ever said to Marjory or anyone else that she was pregnant, he also denied asking for a medical certificate of non-pregnancy. Yet, added that ‘any steps’ that he had taken ‘in the matter’ were ‘taken in the discharge of his duty’ as it was ‘a rule and custom in the Dens Factory to give girls thought to be pregnant warning to leave’. His argument was effectively that as Marjory had not been given warning to leave, he had not accused her of being pregnant.

So the question is whether Craig ever thought she was pregnant or instead used his power to cast aspersions on her character or ‘respectability’? Did he do it because he could? Or was Marjory put through this ordeal because she was ‘stout’? Did he want an excuse to dismiss her?

Obviously we will never know what happened in the Dens factory in 1892 but it seems to me that Craig had picked on the wrong woman! The fact that Marjory was a ‘respectable’ weaver may be significant in the fact that she challenged his behaviour and demanded compensation. Simply put, she wasn’t going to take it.

On the 29th of November Craig received a letter from Marjory’s lawyer requesting a payment of £50 as damages and suggesting that if this was not paid legal proceedings would follow. Craig agreed to a meeting with Marjory and her mother where he stated that ‘he was sorry for the misunderstanding that had arisen’, but ‘he could not apologise, as he had done no wrong’. He refused to pay any expenses. Marjory went ahead with her legal action against him. His response ‘for the sake of amicable settlement, and without admitting liability’ was to agree to pay Marjory’s expenses on the condition that she withdrew her claim for damages. Are these the actions of a guilty man? Marjory agreed to withdraw her claim. A receipt for £4 4s was drawn up to cover the expenses.

However this was not the end of the matter. At a subsequent hearing at the Sheriff Court in March 1893 Craig suggested that Marjory’s statements were irrelevant and insufficient to support the conclusions of her petition, that her claim for damages or reparation had been discharged by her and thus she could bring no further claim against him. He argued that he was entitled to a decree of absolution. Moreover as he was ‘priveliged and had not acted in malice’ he was entitled to absolution with expenses.

Marjory’s lawyer responded that she had only signed the document ‘on the understanding that she was to be substantially recouped’ and ‘in ignorance of the real terms’. In other words, she had been misled.

While Craig’s lawyer demanded discussion on the relevancy of Marjory’s action against his client, the Sherrif ‘thought the action quite relevant’ and Marjory was instructed to appeal to the Court of Session for a jury trial.

In subsequent coverage of what was described as ‘a Dundee Slander Case’ it becomes clear that Marjory and her mother had been coerced into signing an agreement (described as ‘a line’)  to withdraw the claim of damages on condition that the expenses incurred would be paid and ‘promised to recompense her for the injury she had sustained to her feelings’. Marjory and her mother stated that ‘the line referred to … had never been read out to them and they were unaware of its contents’. Mr Murray, the Mill Manager, paid the expenses but ‘informed them that he could do nothing further in the case’. Marjory thus pursued damages through the court as we know. Mr Murray stated through his lawyer that ‘he had acted mainly for the sake of preventing a scandal in the works’, he alleged that he had ‘read over the line in question’ to Marjory, but also admitted that it had been written out by him before Marjory and her mother had arrived.[5] Indeed the Sheriff found that Marjory had signed:

‘under persuasion and pressure suddenly applied to her, when she had no opportunity of consulting her law agent or her father, by a person in a position of authority and superintendence over her, a friend of the defender, and who knew little or nothing about the merits of the cause that he pressed her to abandon, except what he had learned from the defender outwith her presence’.[6]

In October 1893 the case was settled out of court with Craig granting a letter of apology, paying £25 (£2,051.63 in today’s money) in damages, and paying all the court expenses for all actions.[7]

While the intention of Craig’s original actions remain unclear, Marjory was sufficiently insulted by the insinuation that she was in ‘a pregnant condition’ to pursue him for damages in the Sheriff Court in Dundee. As a young unmarried women, a ‘respectable’ weaver her reputation was obviously important to her and she didn’t want to be gossiped about or humiliated in her workplace on account of being ‘stout’.

Throughout the account of the slander case brought against Craig, his power as her boss is clearly evident, but she challenges this throughout. She is not scared to defend herself. 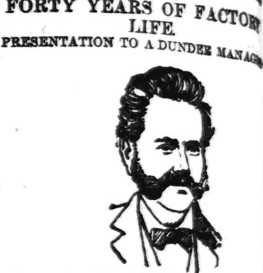 Whether or not Craig learned from the experience we’ll never know. What we do know is that he retired the following year in 1894 as manager of the powerloom factory at the Dens Works where his long service (40 years) and esteem was celebrated in Maxwelltown Hall by friends and employees. He was presented with a ‘gold albert chain’ and a ‘silver salver’ from the workforce. In his address he discussed the improvements in conditions for the workers over the years suggesting that ‘Formerly 12.5 per cent of the girls were thrown aside in bad health and now only about 3 percent were laid aside’. Paternalism indeed.

With grateful thanks to Dr Alexis Wearmouth (School of Business and Management at Queen Mary, University of London) who first sent me the clips relating to the Slander Case while we were colleagues at the Univeristy of Dundee