Dr Elizabeth Ritchie (University of the Highlands and Islands)

I have a favourite set of placemats. They feature old photos of men and women engaged in crofting activities: cutting peat, winnowing corn, manuring fields. Although crofting was a marginal form of part-time agriculture forced on the people, by the mid-nineteenth century the work, and the land, and the embattled culture which came from it were central to the identity of Highlanders. Recognising this, the lenses of academia and government have sharpened their focus on men’s crofting, but to the blurring and near invisibility of their female counterparts, of non-crofting men, and of the other facets of crofting men’s identity.[1]↩ 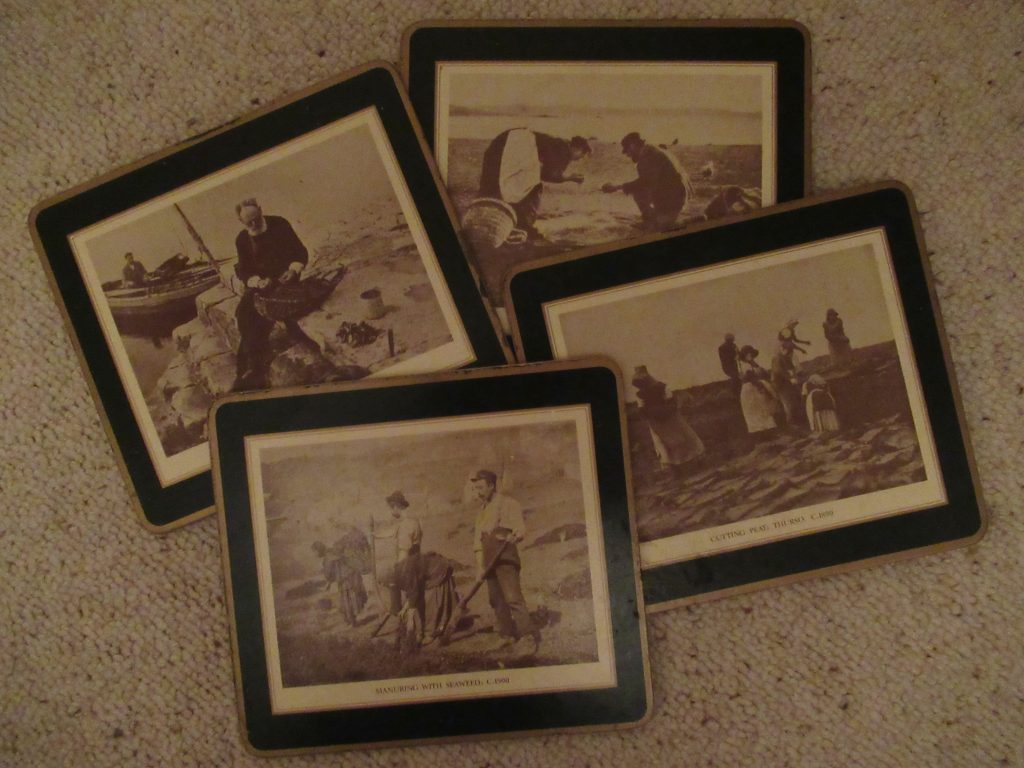 The cultural and political importance of crofting and its association with men suggested to me that it would be a central plank of nineteenth-century Highland masculinity. As I perambulated around dozens of Highland burial grounds, I assumed if I looked for crofters on headstones, I would find an awful lot. I found three. In graveyards, even male crofters are invisible. Instead I encountered hundreds of Highland men who had instead expressed their identity through their families, through a sense of place, through their religion, and through non-crofting work.[2]↩

The exercise was a salient reminder of the variety of Scotland’s north. On the extensive, low-lying arable of Badenoch and Strathspey commercial agriculture was developed. In those graveyards are many farmers. Upland places, like Laggan and Dunbeath, were transformed into sheep farms then shooting estates. There are buried many shepherds and gamekeepers. On the fertile island of Tiree are farmers, master mariners, ship’s captains and boatmen. The men of small towns practiced a wide range of trades and professions. In the graveyard of Portree, the capital of Skye, repose two ship’s stewards, two merchants, three bankers (one for the National Bank of India), and a fischurer, solicitor, shoemaker, medical practitioner, joiner, weaver, salmon fisher, tailor, butcher, procurator fiscal, and the owner of the Caledonian Hotel. 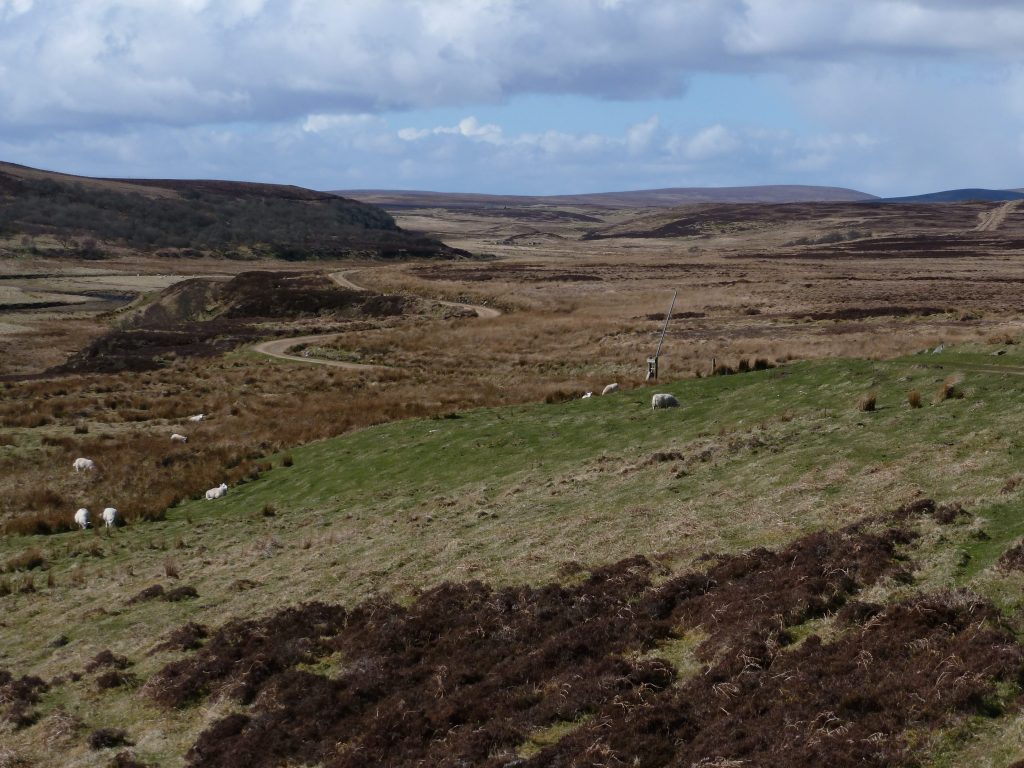 Men of the professional and business classes recorded their expertise and esteem in stone. John Shaw Brown erected a substantial family memorial in Bracadale, Skye. He ensured the inscription mentioned his career as municipal engineer in Burma. It was important to Alexander Mackenzie that his wife’s headstone noted he was an Inverness merchant. Indeed, some stones read like advertisements for the family business. For the middling class of Highland men, professional success and a lifetime of honourable work was core to masculine identity. Donald MacLeay (1783-1868) was ‘45 years forester’; Neil MacLean (1783-1858) was minister of Coll and Tiree for forty nine years; Donald MacLean (1852–1907) was doctor in Garrabost and Stornoway; Donald Fraser (1797-1836) was Agent of the British Fisheries Society in Ullapool; James Kinghorn (1809-61), Ardgay, was an innkeeper; and Murdo MacKenzie (d. 1901) was Invergordon’s bank agent. The Highlands had a middling class, and central to the masculinity of its members was professional commitment and recognition.

But what of the less educated and less privileged? Expense would make it reasonable to find no gravestones for labourers or servants. However there are a few. The stone of James Wilson (1847-1868), a railway surfaceman at Dalwhinnie, was paid for by his fellow workmen. That of Dalwhinnie’s boatman, Donald Kennedy (1814-1881), was erected ‘by a few gentlemen friends’. Occasionally a servant lies beneath an elaborate headstone. These display the master’s munificence as much an honouring the servant. William Anderson (d. 1850) was a ‘faithful servant for twenty five years of James Horne of Langwell and Donald Horne of Langwell Berriedale.’[3]↩ The inscription suggests that, like Stevens the butler in Kazuo Ishigiuro’s The Remains of the Day, Anderson’s entire sense of identity had become bound up in his work.[4]↩ This was particularly the case when the man was foreign, possibly originally a slave. Despite his Scottish name he was ‘a native of the West Indies’. The Highlands had strong connections with the Caribbean slave economy. Anderson’s dates, name and connection with Langwell make it probable he was born into slavery.[5]↩ The employer of another servant, ‘Kopuri Tom’ (d. 1877), knew neither his birth-date nor his real name.[6]↩ He was a ‘Native of the island of Rotumah in the South Pacific Ocean’. Having died at Relugas House, Edinkillie, he was memorialised as ‘the faithful & attached servant of GF Wood Esq’. These men were set apart from other servants by race and nationality.[7]↩ However they thought of themselves, their employers identified them through their exoticism and their excellence as servants. 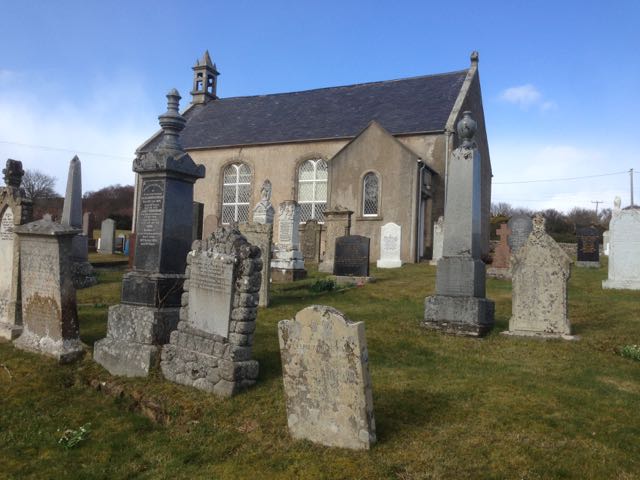 Most men of lower social classes have no grave marker. In Lewis most nineteenth-century crofters lie in rows, between the tiny head and footstones. Yet poverty does not adequately explain the lack of men describing themselves as crofters on their headstones. After all skilled and semi-skilled men, of a similar social status, appear frequently. 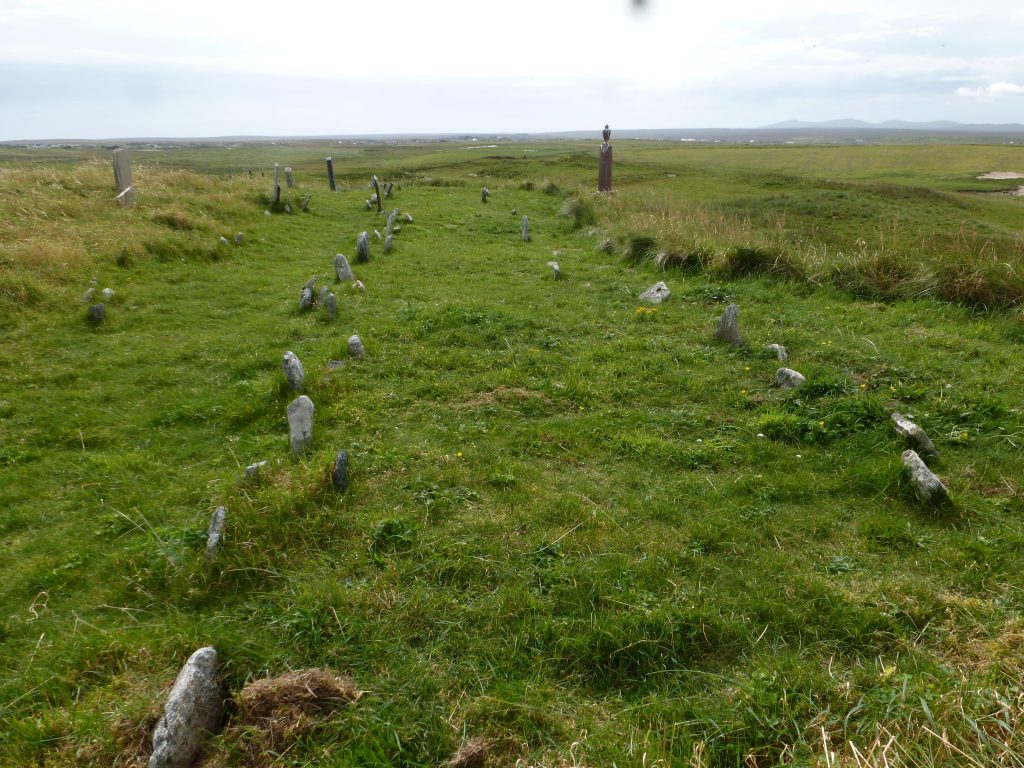 Alexander Chisholm (1814-1873) was blacksmith at Glentruim; James Hossack (1808-1896) was gardener at Cluny Castle; William Ross Fraser (1861-1895) was telegraph lineman at Inverness Post Office; Alexander Macqueen (n.d.) was shoemaker at Camustianavaig; William Ross (1794-1876) was carpenter at Alness Moor; John Clark (1820-88) was saddler at Bonar Bridge; Thomas Calder (1797-1870) was lockkeeper at Gairlochy. These ordinary men’s skill, proficiency and place in society were recorded on their headstones.

It is possible some of these men were also crofters. Crofting was specifically designed to require a man to also take on waged work. However if these men were crofter-shoemakers, crofter-blacksmiths and crofter-lockkeepers, crofting was not the work through which they identified themselves for posterity.

I suspect other crofters are invisible due to their piety. Highland Evangelicalism provided formal positions, paid and unpaid, through which ordinary men could exercise religious leadership. These are noted on their stones. Donald MacKay (n.d.); John MacKay (1761-1839); John MacKenzie (d. 1897); and Alasdair (Beag) MacKay (1801-83), were catechists in Kilmuir Easter, Loth, Gairloch and Skerray respectively. Malcolm MacLeod (1837-1897) was missionary in Snizort, Skye. The income from these jobs probably supplemented their croft. Church voluntary roles provided no income but conferred esteem and authority. Alexander MacKay (1808-1865); Alexander Kemp (1806-88); and Donald MacDonald (1829-1899) from Invercharron, Gairloch and Portnaguran were elders. It is likely these men also crofted, but it was their identity as men of faith that was commemorated. 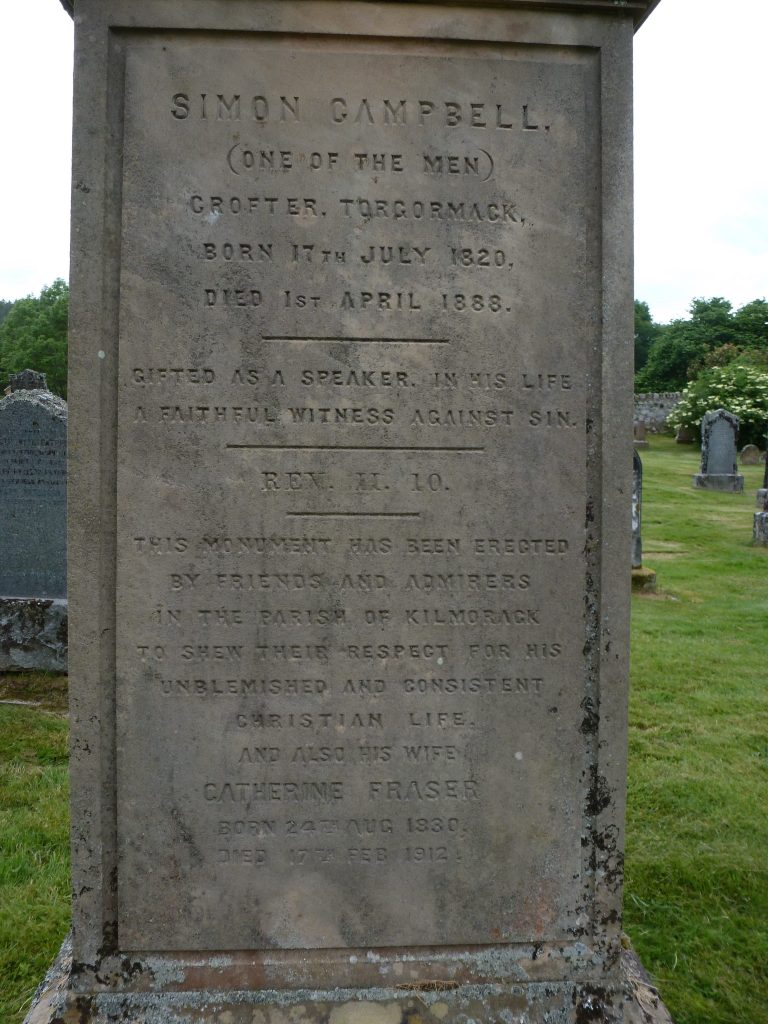 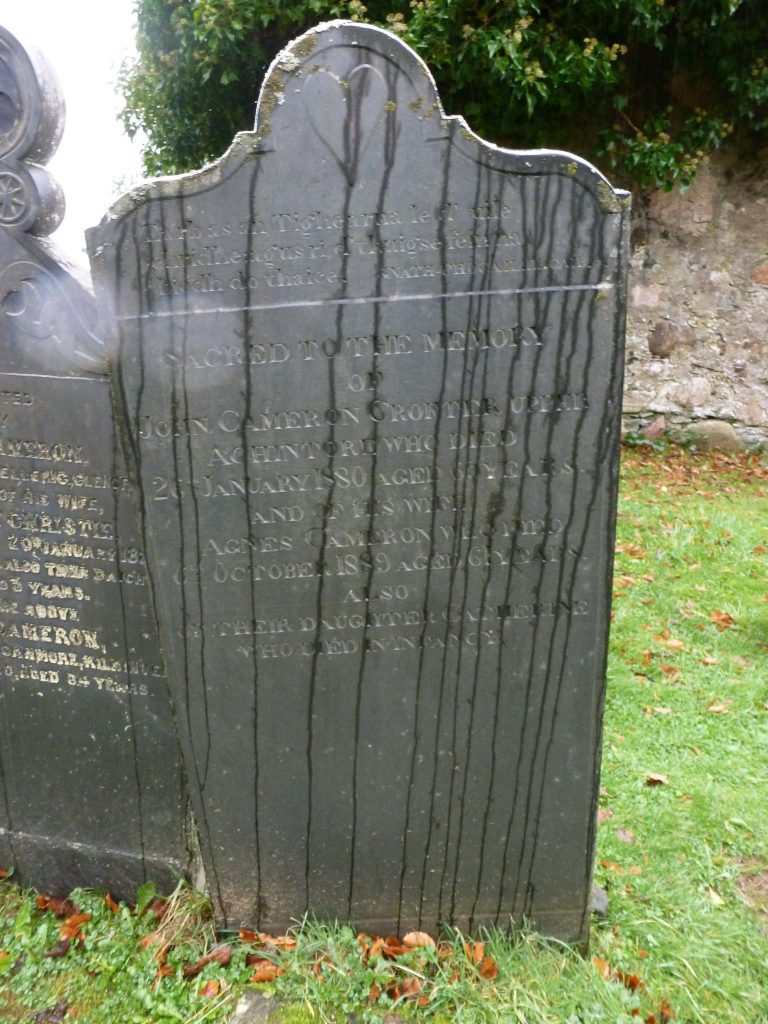 The rarity of men being identified on gravestones as crofters gave me pause. My survey demonstrates that what historians have said about nineteenth-century Englishmen and Americans applies to Highlanders: that work was crucial for their sense of masculinity and their public persona. But why, in a region where crofting was culturally, politically and economically important, do men not display this aspect of their self-identity on their gravestones? Several possibilities present themselves.

So, amidst a historiography preoccupied with land and crofting, it is good for a while to leave aside the documents and instead consider what men and their families said about themselves in stone. Their own words, however selective and stylized, remind us that many Highland men were not crofters. They were merchants, innkeepers, railway surfacemen, servants and bank agents. It is impossible to imagine that crofting was not a vital part of the identity of the working men whose photographs are printed on my placemats. But their apparent invisibility in graveyards reminds us that crofting men had a much broader sense of identity than historians have appreciated.

[1] Female crofters, for example, rarely appear as such in government records or in most history books. Despite women frequently running crofts single-handedly, ‘crofter’ is equated with ‘man’. The gendered view of crofters is dissected in Isobel MacPhail, ‘Land, crofting and the Assynt Crofters Trust: A post-colonial geography?’ unpublished PhD, University of Wales (2002), 214-221; Lynn Abrams has also challenged this through her study of Shetland women. Lynn Abrams, Myth and Materiality in a Woman’s World, Shetland 1800-2000, (Manchester University Press, 2005)↩

[2] The importance of place and of emotional relationships to masculine identity is examined in ‘Place, identity and Dead Men’ 15 February 2017 and ‘A dutiful relative, attached friend and obliging neighbour’ 21 March 2017 respectively. https://historylinksdornoch.wordpress.com/↩

[3] The military and sheep rearing activities of Donald Horne were described in glowing terms in George Tancred, Annals of a Border Club (Jedburgh, T.S. Small, 1899), 261-263. His evicting activities were recorded by Alexander Gunn in ‘Tales of Braemore’, Northern Ensign in 1879. These are reproduced on the Badbea Families website http://www.badbeafamilies.com/gallery-10.htm (accessed 20 December 2016)↩

[5] David Alston, ‘“Very rapid and splendid fortunes”? Highland Scots in Berbice (Guyana) in the early nineteenth century’, Transactions of the Gaelic Society of Inverness, vol. LXIII (2002-2004), pp. 208-36; S. Karly Kehoe, ‘From the Caribbean to the Scottish Highlands: Charitable Enterprise in the Age of Improvement, c.1750 to c.1820’ Rural History (2016) 27.1, 37–59. The family who leased Langwell, before it was sold to James Horne, were Andersons with multi-generation links to the West Indies. It seems probable he was a mixed-race son. The Hornes bought the estate in 1814. They had also benefited from slavery. In 1836 Donald Horne and his sister Isabella McLeay were awarded £1981 0s 11d compensation as co-trustees for her late husband Kenneth MacLeay when slaves on his plantation in British Guiana were freed. Legacies of British Slave-ownership database https://www.ucl.ac.uk/lbs/claim/view/8644 (accessed 20 December 2016)↩

[6] Kopuri is an Indian surname. Rotuma is a Fijian dependency.↩

[7]. Although not slaves, without local networks their options for changing their occupation or employer were more limited. However, A.S. Cowper notes that Anderson latterly ran the Berriedale Inn. I can find no source for this claim which appears in ‘Burial grounds of Caithness and Sutherland’ Caithness Field Club Bulletin, 3.5 (1983). http://www.caithness.org/caithnessfieldclub/bulletins/1983/april1983/burialgrounds.htm (accessed 20 December 2016). It is not supported by the 1841 census where the proprietors are MacLeods. As early as 1790, Bishop Geddes notes ‘dining at Henderson’s’ in Berriedale. William Anderson, ‘Bishop John Geddes: Journal Ambula Coram Deo, Part Second’, The Innes Review, 6.2, (1955), 140. It is possible Geddes misheard the name but he does not comment on Henderson’s race. This, the early date, and the name suggest this proprietor was not William Anderson. However it is perfectly possible he ran the business sometime between the 1790s and 1841.↩

6 thoughts on “The Invisible Crofter: Work, Crofting and Highland Masculinity”