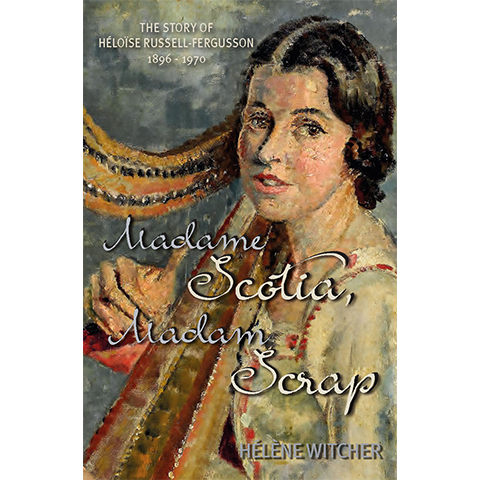 Madame Scotia, Madame Scrap is the story of Héloïse Russell-Fergusson, a clarsach player and composer of great originality and breadth of vision, an intrepid traveller and seeker-out of world music long before the term was invented and a serious scholar. Her scholarly work included the 19 volume Russell-Fergusson Collection of Harps that now resides in the Mitchell Library in Glasgow. There in 2013, 43 years after Heloise’s death, her niece, Hélène Witcher discovered among the tomes and archive boxes, a collection of tapes and an accompanying letter that sparked her resolve to bring her aunt’s life and music to light.

Hélène was Héloïse’s niece, but they only met each other once, a few months before Héloïse died. It was a seminal meeting, initiating a mutually acknowledged affinity that half a century later informed and shaped this atmospheric book. The author skilfully interweaves biography and personal memoir to create a book that’s fascinating for the picture it paints of the life of an unconventional, gifted and driven woman in the first half of the twentieth century and of her relationship with the Gaelic music and culture that possessed her.

The energetic Russell-Fergusson family into which Héloïse was born was established, comfortably off and in many ways conventional. However, it also had its restless and far from conventional side. Héloïse’s mother was a Christian Scientist who decamped from Glasgow with the children to the family’s farm in Argyllshire to breed livestock, and then, after her husband’s death went with the youngest of the four children to Southern Rhodesia (as it then was) and farmed there. Héloïse’s earliest carers were Gaelic-speaking young women from the West Highlands and her childhood, so much of which was spent in Argyllshire, gave her an enduring love of the natural world.

Héloïse was a promising pianist and at 16 she won a place at the Royal Academy of Music in London, on graduation embarking on a professional career as a pianist. Then, in 1923, she took up a post as music teacher in a girls’ school in Washington, Virginia. It was here that she spotted and bought a small Scottish clarsach that triggered her epiphany, her realisation of what she must do – that was, ‘tell the whole world about a great vanishing art.’ She found herself a harp teacher and then returned to Scotland where she travelled extensively in the Hebrides listening to and learning traditional Gaelic songs.

An interesting strand of the book is the account it gives of the changing fortunes of and   attitudes to Gaelic music and culture. Throughout her life Héloïse was an anomaly. She started her career at the tailend of the Celtic Revival (though she always went down well in Brittany; in 1934 she was invested as a Druidic Bardess at their Gorsedd or ‘Grand Festival’ and continues to be a significant and well-regarded figure there). She drew strongly on the repertoire of Marjorie Kennedy-Fraser whose work was attacked by Hugh McDiarmid and others for its alleged lack of authenticity. She was too early for the instrumental folk revival of the 1960s in which the clarsach gained popularity and even more ahead of her time, conceptually and technically in her experimental work which she recorded on four EPs during the late 1960s.

In this hugely creative final phase of her life she broke genuinely new ground, expressing her intense love of, and connection with, the natural world, stretching the capacity of her own voice, the clarsach and incorporating traditional instruments from other parts of the world, foreshadowing the work for example of Karine Polwart. At the same time, she was working on the now digitally retrieved tapes in the Mitchell Library – 23 vignettes of Hebridean life; story, music, the sounds of seagulls and crashing waves, which she had assembled using two small tape recorders, mostly in her car.

Dr Stuart Eydmann, an ethnomusicologist with a keen interest in Héloïse, speaking at a 2015 conference on the Celtic Revival quoted a passage from Muriel Spark’s ‘The Prime of Miss Jean Brodie’ as throwing light on Héloïse’s life and character:

‘There were legions of her kind during the nineteen-thirties, women from the age of thirty and upward, who crowded their war-bereaved spinsterhood with voyages of discovery into new ideas and energetic practices in art or social welfare, education or religion… (having) shrewd wits, high coloured cheeks, constitutions like horses, logical educations, hearty spirits and private means.’

This does not do her – or any woman – justice, with its stereotypical attributions and implication that a woman’s drive and life’s achievement result from the non-availability of a male partner. Héloïse’s passion, creativity and relentless hard work were not subject to the fashions of the time, but they have left an enduring legacy in the world of music, while her life and work remain relevant and interesting to all women who ponder women’s place in society, past and present.

You can listen to Héloïse Russel-Ferguson by clicking on the link below:

Madame Scotia, Madame Scrap: The story of Héloïse Russell-Fergusson 1896 – 1970, published in 2017 by the Islands Book Trust and can be purchased online here – https://islandsbooktrust.org/products/madame-scotia-madam-scrap