One hundred years ago today, some women in Scotland went to the polling stations for the first time to have their say in the parliamentary elections. Throughout 2018, across Scotland we have been celebrating 100 years since the Representation of the People Act (1918) came into being. As we should all know by now, this gave women over 30 years of age who met property or educational qualifications the right to vote for their representation at Westminster. While all men over 21 could now vote, women still had another ten years of fight ahead of them to achieve suffrage on the same terms as men. In addition to voting, emergency legislation was passed to enable women to stand as MPs in the December election. 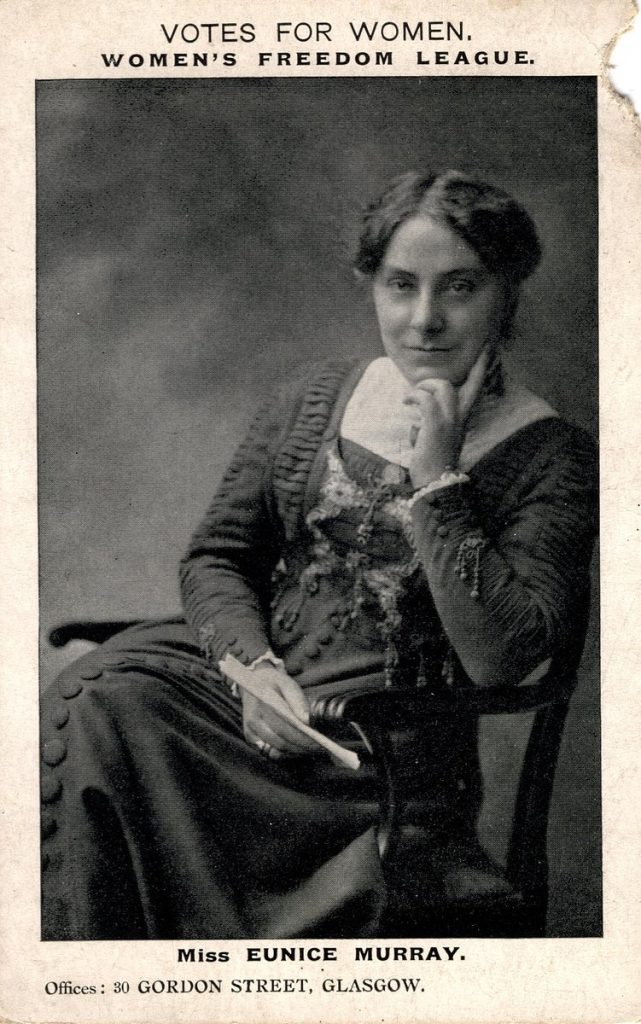 When the election was held on 14th December 1918, seven trailblazing women put their names on the ballot. In Scotland, it was reported that in Glasgow, ‘Bridgeton has the distinction of being the only constituency in the city which can boast a lady candidate.’[1] Eunice Guthrie Murray was that ‘lady’.  The daughter of a well-known Glasgow lawyer, Dr David Murray who was one of the founders of the Glasgow Ladies Higher Education Society in 1876, Murray attended the progressive St Leonard School in St Andrews which was a where Louisa Innes Lumsden, one of the original Girton College, Cambridge graduates and women’s educational pioneer, was headmistress for a time. During the campaign for female suffrage, Murray joined the 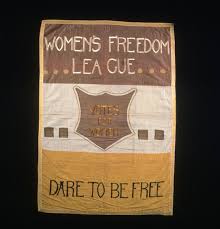 Women’s Freedom League in 1907 and was the scattered (rural) members secretary, eventually, becoming the President of the WFL in Scotland in 1913. The Women’s Freedom League was a non-violent militant group most famous for first chaining themselves to railings and leading the 1911 Census boycott. Inspired after attended the International Women’s Suffrage Alliance in Budapest in 1913, Eunice Murray was arrested for obstruction when she tried to address a meeting near 10 Downing Street on women’s suffrage.[2] Unlike the Pankhursts’ Women’s Social and Political Union (WSPU) and the National Union of Women’s Suffrage Societies (NUWSS), the WFL continued to campaign for the women’s suffrage throughout the First World War. Murray was an active feminist who had published numerous leaflets on women and their position in society such as The Illogical Woman. Like many feminists, Murray argued for the vote based on the unique roles of men and women. She observed, ‘We have always held, and hold now, that it is because men and women are so different, and not because they are so alike, that we require the vote.’[3]

The election was held in the midst of the Spanish Flu epidemic with 327 deaths in the Glasgow that week, compared to 386 the previous week. Schools and docks were closed when half a million Glaswegians took to the polls, of which just over one-third were newly enfranchised women. The Bridgeton area of Glasgow, in the East End of the city, was well known for high levels of poverty. In a speech to a well-attended assembly during her campaign, Eunice Murray was reported to have stated her support for the coalition government and ‘its great schemes for social reform and industrial development’ but called for more women on the counsels that were deciding the post-war future of the country. Murray wanted women represented on the Reconstruction Committees and the Peace Council.[4] She remarked that it took war for Britain to realise the state of its own ‘social life’ and argued that when it came to reform women were more ‘determined than men’ and less likely to accept ‘empty promises’. In response to a claim that all women candidates were pacifists she wrote to the Spectator on 23rd November 1918, ‘I believe that the war we have just fought and won was a righteous one, and that it was the duty of newly enfranchised women to support the country’. Out of the seven women standing for election she notes that two others and herself were not pacifists, which the reply commends.[5]

When the results were in on 30th December 1918, delayed to allow those men still overseas the chance to vote, Eunice Murray was one of the ‘luckless ones’ who forfeited her £150. Murray came in third with 997 votes, behind Labour’s James Maxton at 7,860 and the ward winner was Coalition Liberal candidate Scott McCallum with 10,887. The election saw the defeat of the Asquith Liberals and the landslide of the Coalition Liberals. Murray was not deterred by her defeat and went to on to have an active political life. Elected as councillor in 1923 to Dunbartonshire Council, Murray was also the founder and President of the Scottish Women’s Rural Institute in the area. Murray died on 26th March 1960 having led an active and inspirational life and today we remember her as the first women to break the barrier in Scotland to stand as an MP.