For all of you interested in learning even more about the campaign for women’s suffrage in Scotland there is currently an exhibition on at the National Records of Scotland in Edinburgh entitled Malicious Mischief? – Scottish Suffragettes exhibition. It opened on the 1st of August and will end on the 31st of August. Catch it while you can!

The press release on the NRS website states that this is the first exhibition to bring together records of the suffragettes and the Scottish justice system for the first time, with records and evidence relating to protests and arrests, hunger strikes and force-feeding.

Some of the most active suffragettes in Scotland including Ethel Moorhead, Frances Gordon and Arabella Scott who all suffered force-feeding during imprisonment are featured. Private correspondence from activists is also included, along with letters, newspaper cuttings and trial papers. 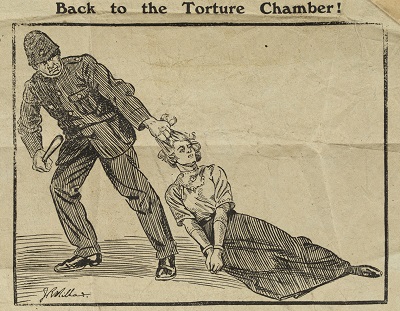 Accompanying the exhibition is a series of free talks which considers different aspects of the women’s suffrage movement. Details can be found on the NRS Events, Talks and Visits page.

Apologies that there are only two talks left:

Throughout the long campaign for women’s suffrage and broader feminist claims in Scotland, many of the movement’s leaders and activists were women of religious faith. They drew on their beliefs and values to make the case for equal rights and citizenship, and many became vocal critics of patriarchal Church traditions and practices in Presbyterian Scotland. Attempts were made to engage institutional church support for the Cause, and in 1912 a Scottish Churches League for Women’s Suffrage was established. Reactionaries railed against ‘the unholy sisterhood’ while more progressive Presbyterian ministers extolled the potential virtues of enfranchised women. Both constitutionalist and particularly militant campaigners often experienced and articulated the campaign as a spiritual movement with a gendered vision of social transformation. And for some women, this was carried into the war years as a feminist commitment to pacifist war resistance.

Drawing on sources including material in the National Records of Scotland, this talk will explore some of the key people, events and tensions involved in the complex, many faceted religious dimensions of the suffrage movement in Scotland, with reference to contrasting women including Lady Frances Balfour and socialist militant activist Helen Crawfurd.

Lesley is a feminist historian and activist who has written about women and Presbyterianism, the Women’s Peace Crusade, and the history of Women’s Aid in Scotland.

It is traditionally assumed that after the partial enfranchisement of women in 1918 the women’s movement in the UK became moribund. Nothing could be further from the truth. The campaign for equality continued with suffragists and suffragettes continuing to work in a variety of women’s organisations in campaigns to improve the lives of women of all backgrounds. New organisations were established which focused on ‘active citizenship’ and encouraged women to use their votes as well as demand an extension of the franchise to all women. One such organisation was the Edinburgh Women’s Citizens Association (EWCA), a non-party explicitly feminist organisation which supported female candidates in local and national elections. It was affiliated to the Scottish Council of Women’s Citizens Assocations (SCWCA), which had branches throughout Scotland. The records for both the EWCA and SCWCA are held in the National Records of Scotland. In this talk I will discuss how these archive materials can be used, along with other sources, to find out more about the campaigns and demands of feminists in interwar Scotland, with a focus on Edinburgh.

Dr Valerie Wright serves on the steering committee of Women’s History Scotland and is a co-author and curator of ‘The Women’s Suffrage Movement in Scotland, 1867-1928: A learning Resource’ available at https://womenssuffragescotland.wordpress.com/