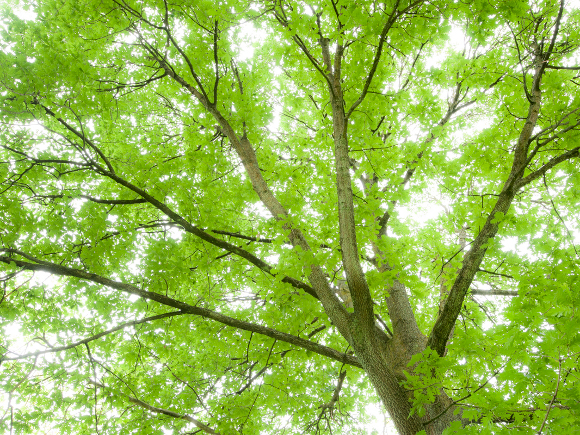 ‘the vote was the door to everything and the door was open’. [1]

On 20th April 1918, in Glasgow’s Kelvingrove Park, Louisa Lumsden was ‘honoured’ to plant an oak tree to commemorate and celebrate the passing of the Representation of the People Act 1918 which gave some women the vote. The oak tree stands at the top of Kelvin Way and has continued to be a reminder, symbol and inspiration to the women of Glasgow over the past hundred years. In 1995, on International Women’s Day, the Women’s Committee of Glasgow City Council erected a beautiful plaque next to the tree which reads, ‘This oak tree was planted by Women’s Suffrage Organisations in Glasgow on 20 April 1918 to commemorate the granting of votes to women’. The oak won Scottish Tree of the Year in 2015, nominated by the Glasgow Women’s Library who feature it as a stop on their West End Heritage walk. While sadly damaged and much reduced by Storm Ophelia in 2017, the tree is still standing and will hopefully weather future storms. Glasgow City Council donated the storm damaged oak cuttings to the Glasgow Women’s Library.

I first noticed the oak wandering up Kelvin Way many years ago thanks to the plaque and often wondered who were the women that planted this tree. It seems fitting that for the centenary of its planting we should learn their names and more about that Saturday in Kelvingrove Park. 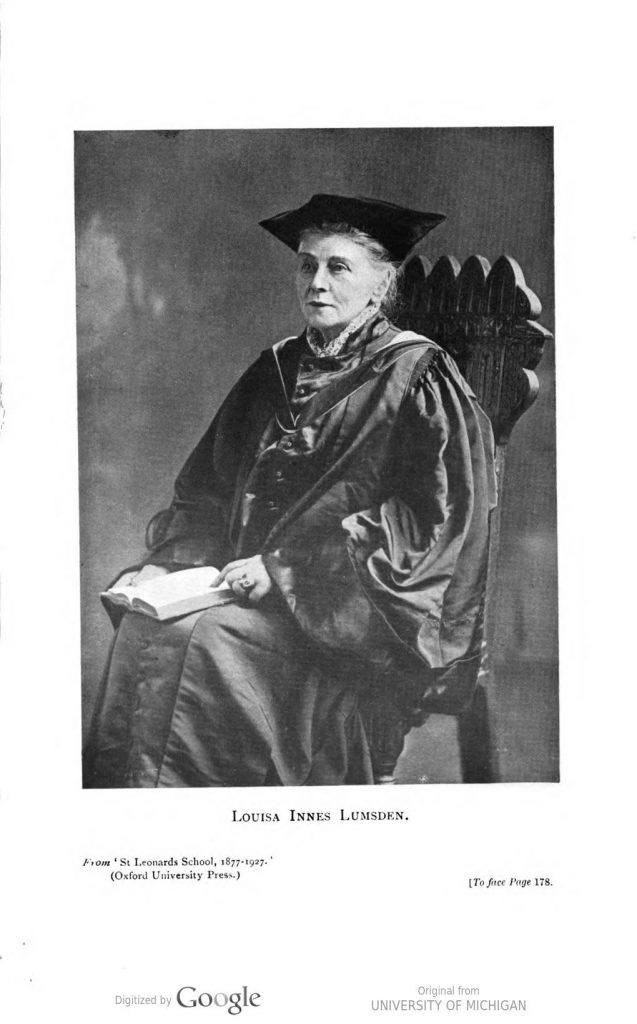 Image of Louisa Lumsden in her St Leonard robes from her autobiography Yellow Leaves: Memories of a Long Life (1933), p.178

In Louisa Lumsden’s autobiography, Yellow Leaves: Memories of a Long Life (1933), she mentions the event briefly and tells us it was presided over by Frances Melville (1973-1962) with the thanks offered by Eunice Guthrie Murray (1878-1960). Lumsden, 78 years of age at the time, had come down from Aberdeen to plant the tree. She was a pioneer of higher education having been one of five women who attend Girton College, Cambridge in 1869 and was a lifelong advocate for girls and women’s education. At one point, she was the Headmistress of St Leonard’s School in St Andrews where Eunice Murray was educated. In 1908, Lumsden was invited to become the president of the Aberdeen Suffrage Society (a branch of National Union of Women’s Suffrage Societies). She agreed as long as it did not take up too much of her time but she soon ‘found that little time was left for anything else’.[2] In her autobiography she recalls loaning the suffrage movement her caravan so they could do a kind of suffragists on tour with key figures such as Millicent Fawcett and Elise Ingis. Lumsden described herself as a constitutional suffragist and felt they were fighting a battle on two fronts with the militant suffragettes and the anti-suffragists. As we have seen throughout this year of #vote100, the distinction and tensions between suffragists and suffragettes has been highlighted (see WHS suffrage resource). The event in Glasgow was a ‘joint celebration by Women’s Suffrage Societies’.[3] A meeting after the tree planting was held Queen’s Rooms. Tickets were 6d and could be purchased from either Glasgow Society for Women’s Suffrage, a suffragist society, or the Women’s Freedom League, a suffragette association. After a bit of digging it has become clearer that the suffragists and suffragettes were united in this celebration.[4] The presence of figures from all sides of the Suffrage Movement, both militant and constitutional, indicates that this was intended to unite and celebrate the legacy of all women who fought for the vote. 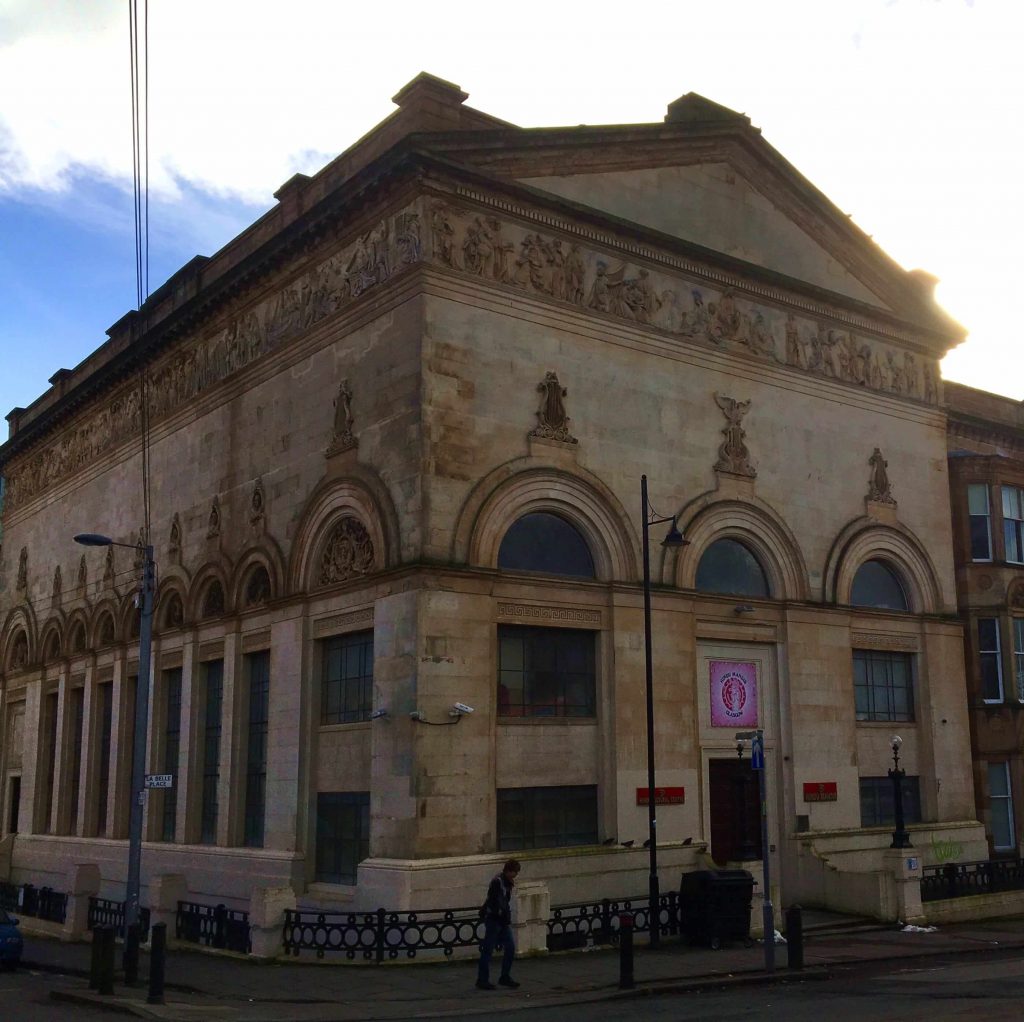 The planting of the Suffrage Oak in Kelvin Way was a collaborative event bring together multiple suffrage groups in recognition of this great step forward for women. The Glasgow Herald reported the event was organised by the Glasgow Society of Women’s Suffrage, Scottish Universities Suffrage Union, Women’s Freedom League, Conservative and Unionist Women’s Franchise and United Suffragists.[5] The tree planting ceremony was presided over by Frances Melville who was the Mistress of Queen Margaret College, Glasgow and a member of the Scottish Universities Suffrage Union. She was a suffragist and an advocate for women’s higher education. One of the first women to matriculate at Edinburgh University in 1892, Melville was the first woman in Scotland to be awarded a Bachelor of Divinity in 1910 from St Andrews. It was reported that Melville’s speech at the planting of the oak explained the choice of memorial:

‘The Enfranchisement of women would bring new life into the body politic, and therefore it was most appropriate to plant in commemoration a living and growing thing’

She also payed tribute to the role of early suffragists work to the ‘women and men who had so long and loyally upheld the cause – especially those of the older generation, who had worked so splendidly for the cause in its earlier days.’ 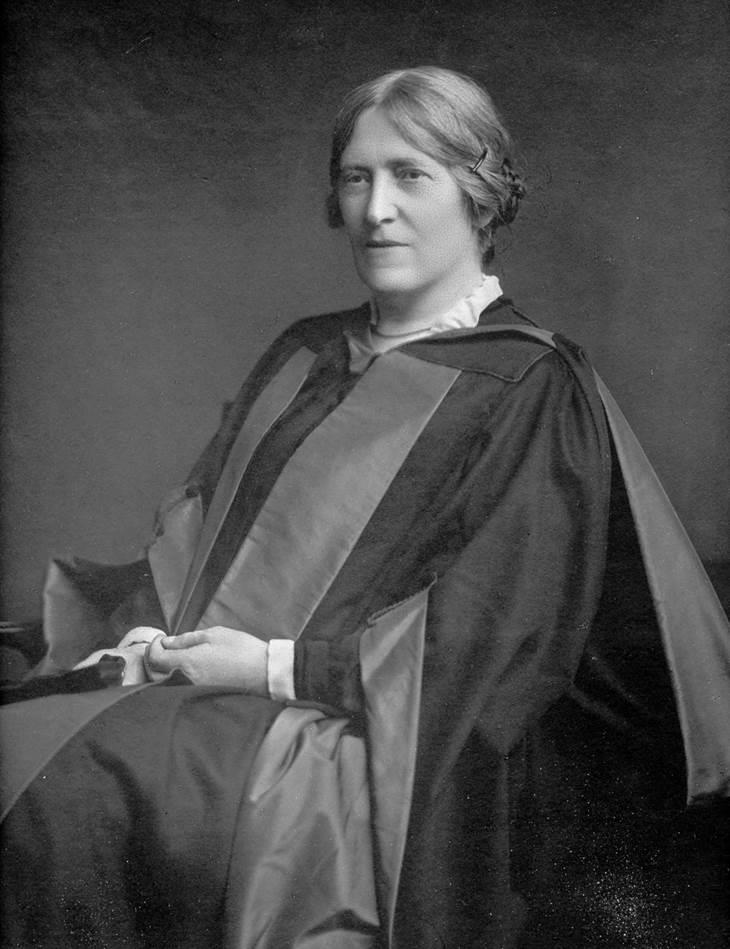 The vote of thanks was offered by Eunice Gurthrie Murray, who later that year would be the first woman in Scotland to stand as a candidate in a parliamentary election for Bridgeton. She was a lawyer from Cardross in Dunbartonshire and a prominent figure within the Women’s Freedom League. The WFL broke away from the Women’s Political and Social Union, unhappy with the Pankhurst heavy handed centralised control. Murray wrote, ‘I do not like the Pankhursts much, but I declare I bow to their spirit.’[6] Murray was herself arrested twice for addressing public meetings but not charged or imprisoned. She took part in WSPU processions in London and Edinburgh in 1910. A lifelong activist for women’s rights, Murray wrote extensively on the position of women in society. At the Kelvingrove celebration, she was reported to have said:

‘no woman looking back on the long fight for the suffrage could not help being glad she was a suffragist.’

Murray emphasised that women were ready and prepared to take on the responsibility of governance.

The vote of thanks was offered by Eunice Gurthrie Murray, who sat on the nation committee for the Women’s Freedom League.

The celebrations acknowledged the underlying tension of the 1918 enfranchisement in that only some women were now entitled to vote. Where all men over 21 years of age became enfranchised, it was only women over 30 who met the property qualification who could now vote. The events and speeches of the day addressed this and while 1918 was a huge step forward for women there was still work to be done. Later, at the meeting in the Queen’s Rooms, the chair Chrystal MacMillan was reported in the Glasgow Herald as stating that:

‘in celebrating this victory of women’s suffrage they were cognisant of the fact that many women were not included, and while they rejoice in the franchisement of women over 30, they hoped it would not be too long before other women were also enfranchised.’

Louisa Lumsden’s wisdom to young women who felt ‘bitterly’ about their exclusion was to ‘[h]ave patience, prepare yourselves; you cannot be too good for the opportunities that many come in the future’.

The oak tree is a symbol of reconciliation between all sides of the suffrage movement, it was a reminder that women must continue to grow women’s rights. After 1918, women organised themselves into various associations to campaign on issues including equal citizenship, women’s welfare and housing rights.[7] The Glasgow Society for Equal Citizenship held a regular commemorative dinner every year to celebrate the 1918 achievement. Prominent Scottish feminists were regular attendees including Marion Gilchrist, Elsie Inglis, Eunice Murray, Marion Buchanan and Frances Melville. These feminists continued to fight, campaign and advocate for women’s rights in all areas of society long after the vote was won. The Suffrage Oak is a physical commemoration to the legacy of the suffrage movement but it also is a reminder that the fight for women’s rights is a living and breathing movement that needs to be nurtured and maintained. I think Louisa Lumsden, Frances Melville and Eunice Murray would be proud of what their daughters and granddaughters have achieved in the hundred years since they planted their tree and to know that the Oak still inspires girls and women today to continue the fight for equality for all women. 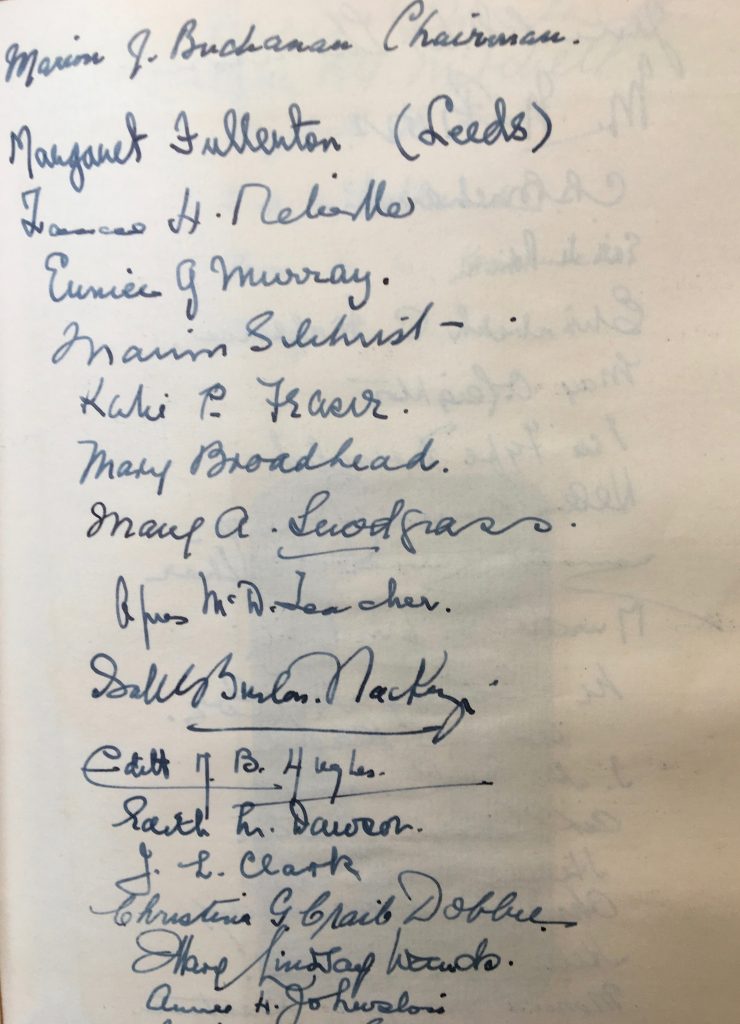 Page signed by attendees of the Glasgow Society for Equal Citizenship Society Commemorative Dinner, 1938 including Frances Melville, Eunice Murray, Marion Gilchrist and others. Part of the Marion Buchanan Collection at the Glasgow Women’s Library.

On the Suffrage movement in Aberdeeen see Sarah Pedersen, ‘The Conciliatory Sufragette’ http://womenshistoryscotland.org/wp-content/uploads/2014/07/5-The-Conciliatory-Suffragette.pdf

[4] This is unsurprising as Sarah Pederson has shown networks and friendships between both sides were not uncommon despite their disagreement over methods.

[7] See our suffrage resource for more information on these associations

Women as active citizens: politics and feminism in interwar Scotland

2 thoughts on “The Suffrage Oak: Marking 100 Years of Women ‘Living and Growing’ into the Body Politic”