THE WOMEN’S SUFFRAGE MOVEMENT IN SCOTLAND, 1867-1928: A LEARNING RESOURCE

We were fortunate to have such welcoming and supporting hosts in Dundee’s Central Library in the Wellgate with Maureen Hood and her team providing display materials from ‘Voteless not Voiceless‘ an exhibition held in the library a few years ago. 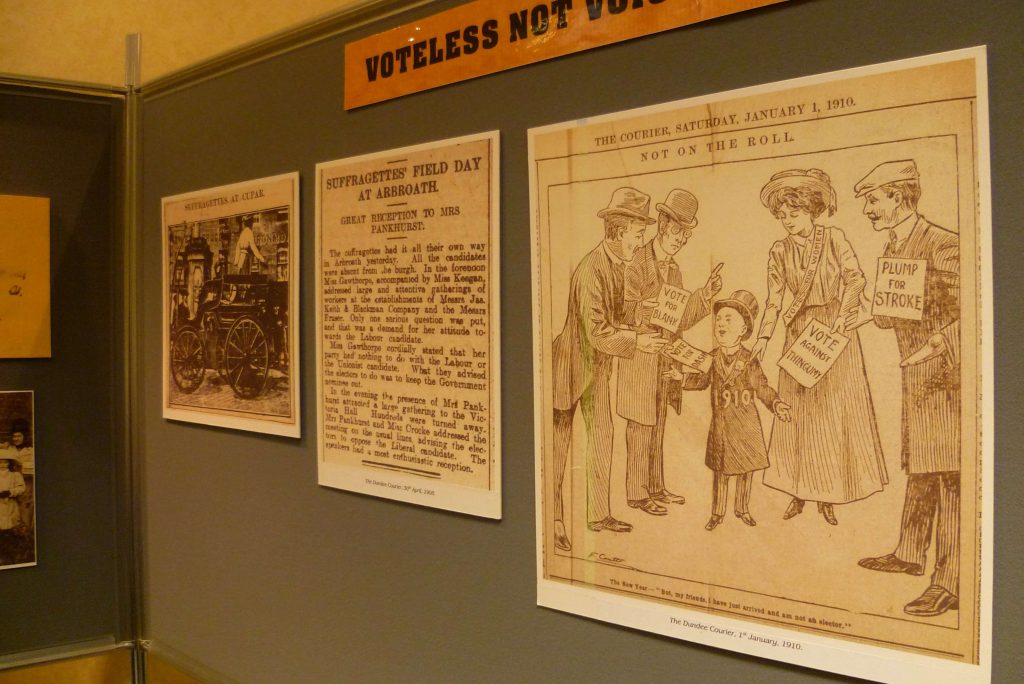 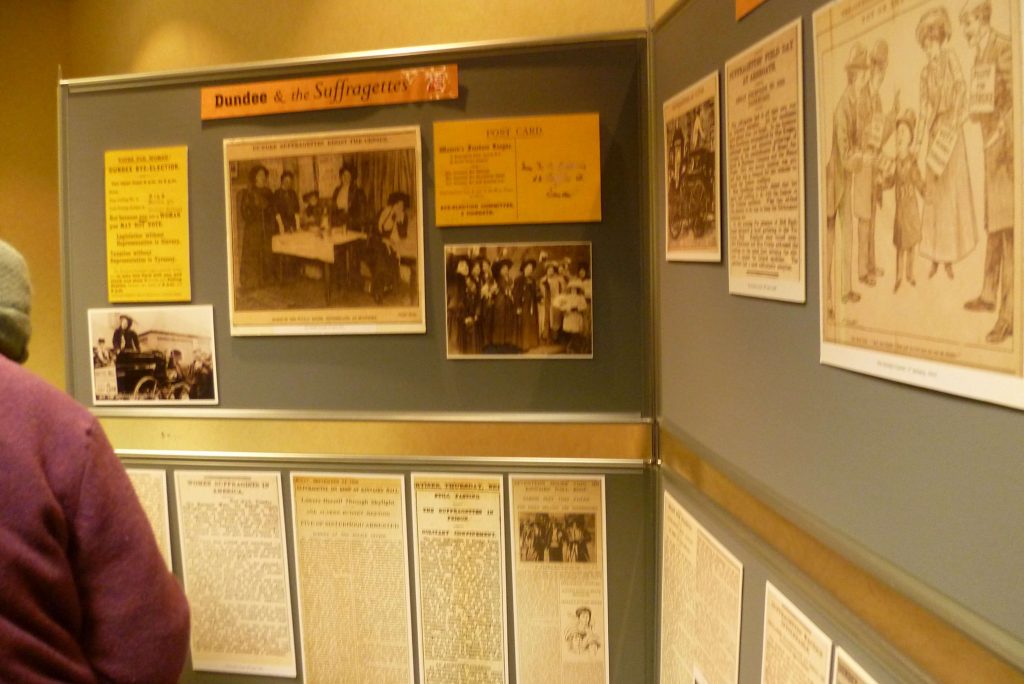 The launch was very well attended and there was a great deal of enthusiasm for both the online learning resource and learning more about the history of the suffrage movement in Dundee. In fact it turns out that Dundee could not have been a better place to hold the launch given the richness of the existing history of women in the city.

Following a brief introduction on our motivations for creating the resource and a tour of what information it contained, Esther Breitenbach of the WHS steering committeee gave an overview of the suffrage movement in Scotland, emphasising the long-run nature of the campaign for enfranchisement in Scotland and the differing demands of various groups of women. Central to this is the difference between suffragists and suffragettes: Suffragists used peaceful constitutional methods to make their case that women should have the vote on the same terms on men, and suffragist groups included the National Union of Women’s Suffrage Societies (NUWSS) and the Women’s Freedom League (WFL). The suffragettes on the other hand advocated militant action and were largely members of the Women’s Social and Political Union (WSPU). Numerically there were far more suffragists than suffragettes and yet it is the suffragettes that live on in popular memory of the campaign for the vote. Esther also spoke of the early organisation of women in favour of the suffrage cause in Dundee and women’s involvement in political parties and activity in the city. 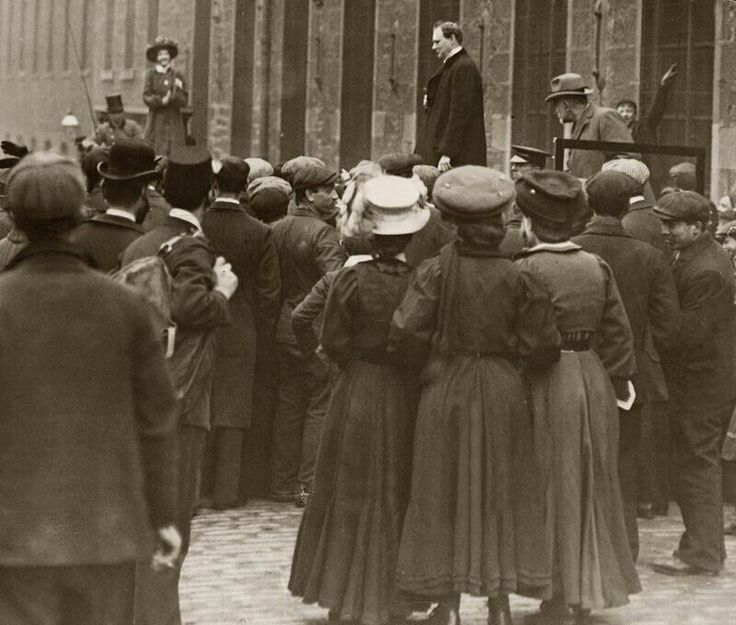 Norman Watson, journalist and author of several books on women’s history in Dundee including the soon to be reissued Dundee’s Suffragettes: Their Remarkable Struggle to Win Votes for Women then spoke very authoritatively and engagingly on the activities of members of the WSPU and WFL in Dundee such as Ethel Moorehead, Lila Clunas and Agnes Husband. Drawing on his vast collection of postcards, suffrage memorabilia, not to mention extensive knowledge, we all learned a great deal about the reasons why there was comparatively more suffrage activity in Dundee. Central to this was the fact that the then Prime Minister’s constituency was in East Fife and Winston Churchill was standing Liberal MP for Dundee in 1908. At this point Churchill was a rising star in the party, President of the Board of Trade and would go on to be Home Secretary in 1910. As a result Dundee was a high profile constituency and thus a strategic target of suffragette militancy. One of the most famous disrupting strategy was taken by Mary Maloney a member of the WSPU who would ring a bell every time Churchill addressed a crowd in Dundee (see image above). Nearby Perth prison also became notorious as this was where suffragettes were sent to be force-fed in Scotland. The WSPU rented a flat across from the prison so that members could sing songs and chants of solidarity with those imprisoned.

If you would like a more in-depth account of Dundee’s suffragette history look out for the publication of Norman’s book later this year. 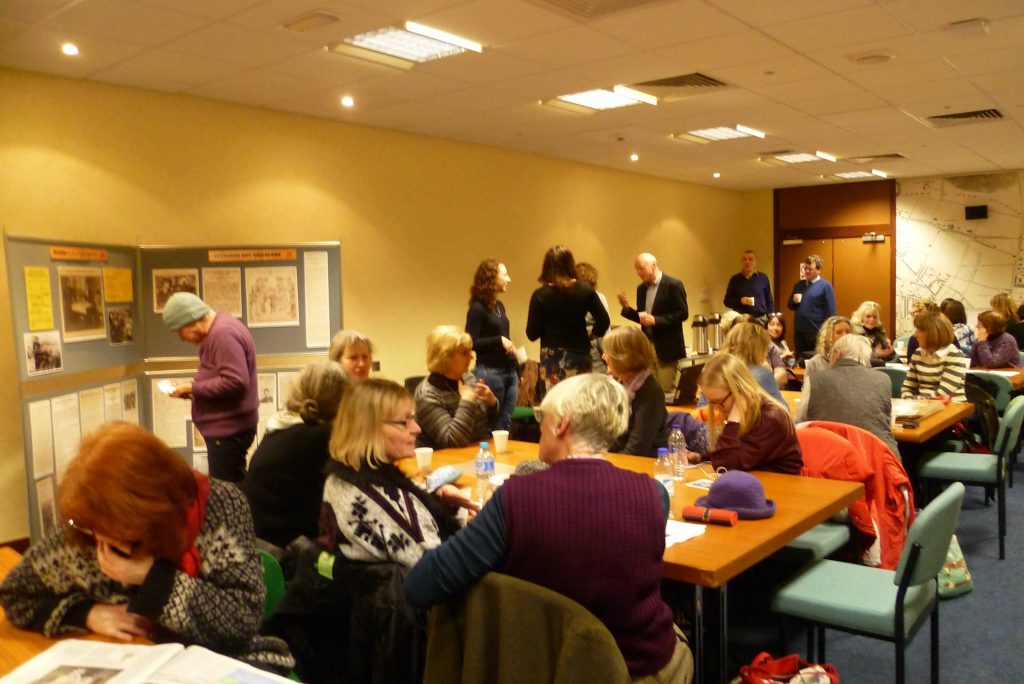 Following a tea and coffee break, with refreshments generously provided by Dundee Central Library, historian Kenneth Baxter gave a presentation on the political representation of women in Dundee, which from 1918 to c. 1955 lagged behind the other major cities in Scotland. Dundonians were slow to elect their first female Councillor and first female MP. It was interesting to hear more about the women who were elected, their careers and political priorities in the city. While there is no one definitive answer to explain the relative lack of female elected representatives in Dundee given the city’s reputation as a women’s town, we had a good discussion with many suggestions from those attending the event.

The official launch of the online learning resource was a great success and we are keen to hold similar events throughout Scotland. If you are part of a local history or community group and would like to know more about the suffrage movement in your area please get in touch by emailing: info@womenshistoryscotland.org