Why commemorate the 1915 Rent Strike?

One hundred years ago women in Glasgow were celebrating securing the Rent Restrictions Act, passed by Lloyd George in December 1915. This followed months of protest against the rent increases they had been subjected to by their landlords which had resulted in a rent strike. Similar strikes were organised in other cities in the UK (See Ann Petrie’s The Rent Strikes: An East Coast Perspective, Abertay Historical Society, 2008). Glasgow’s rent strike has been memorialised, channelled and appropriated by a range of organisations over the years. The Rent Strike is associated with ‘Red Clydeside’ and radical working-class direct action. It is celebrated, and rightly so. 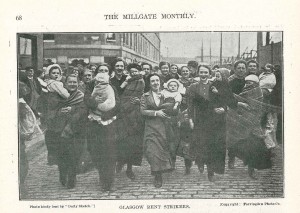 The story in Glasgow is well known: landlords increase the rents on overcrowded tenements flats in Govan and Partick; profiteering while the men are away fighting, women hold ‘stair heid’ and back court meetings, they band together with direct action i.e. pounding the balliff’s men with flour and other missiles and refusing to let fellow strikers be evicted, the movement grows larger as more women in a variety of areas become involved, the labour movement get in on the action as the campaign becomes more organised and when male workers at munitions factories come out in sympathy on the 17th of November in a mass protest (there were 25,000 rent strikers by this point), Lloyd George passes the Rent Restrictions Act within a month (I’m obviously missing out a lot of detail in this potted history!).

However as the Sheffield Film Co-operative’s documentary ‘Red Skirts on Clydeside’ highlights (http://www.screenonline.org.uk/film/id/890164/) little is actually known about the women involved in the strike. Those of us interested in the history of women in Scotland know about Mary Barbour, Helen Crawfurd and Agnes Dollan (less is known of Jean Ferguson), as these women continued to be involved in left wing politics in the interwar years. But the general public today know little of these women. 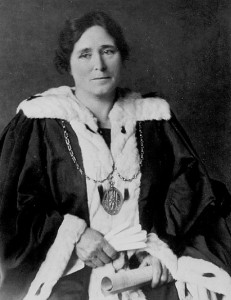 This is why the ‘Remember Mary Barbour Campaign’ (https://remembermarybarbour.wordpress.com/mary-barbour-rent-strike-1915/) is so important in raising the profile of a woman who campaigned tirelessly on behalf of working-class women and for improvements to their lives. Dr Catriona Burness has been undertaking further research so we now know a lot more about Mary Barbour and her political career (see C. Burness, ‘Remember Mary Barbour’ Scottish Labour History (http://www.scottishlabourhistory.org.uk/the-journal/), 50 (2015), pp. 81-96). The aim of the campaign is to raise money to erect a statue (the maquettes have been unveiled and are currently on tour around the city) of Mary in Govan as a permanent memorial to her life and work.

In the last few months the Remember Mary Barbour Campaign has been involved with a range of organisations in the ‘Striking Season’ to commemorate the centenary of the Rent Strikes. http://events.glasgowlife.org.uk/event/1/striking-season-mary-barbour-and-the-rent-strikes-of-1915 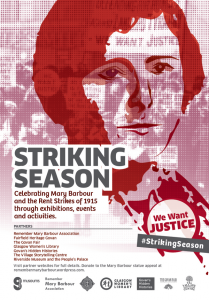 But while the story of the Rent Strikes has been told (see J. Melling’s book Rent Strikes: People’s Struggle for Housing in West Scotland 1890-1916, Polygon, 1983) we still don’t know enough about the long term effects of the strike and the Rent Restrictions Act. Some questions may never be answered – we might not find the stories of all the un-sung heroines of the strike, the rank and file as opposed to the leaders. It is difficult to capture these voices one hundred years on. But we can analyse in more depth the way in which the memory of the rent strike has been used in other housing protests (see Ewan Gibbs, ‘Civic Scotland versus Communities on Clydeside: poll tax and non-payment c. 1987-1990, Scottish Labour History (http://www.scottishlabourhistory.org.uk/the-journal/), 49, (2014), pp. 86-106). The Rent Restrictions act also had implications on the spread of municipal house building, and housing was a central plank of both Labour Party and Independent Labour Party policy in Glasgow in the interwar years and beyond.

So there were many consequences of the Rent Strike both in the immediate aftermath, subsequent decades and for today. This is the reason why, way back in February of this year, following the successful event at the University of Edinburgh ‘Women’s Movements in Scotland: From Enfranchisement to the Referendum’ we decided that we really should organise an event to both commemorate the Rent Strike of 1915 and to ask what can be learned from this action today. 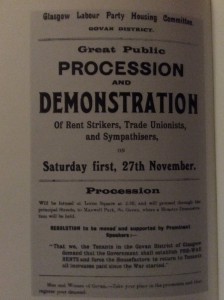 We held this event exactly one hundred years to the day of the ‘Great Public Procession and Demonstration’ in Maxwell Park, Govan on the 27th of November, which was organised to demand the repayment of all rent increases from the start of the war. So the fight for fair rents and municipal housing did not stop with the passing of the Rent Restrictions Act.

‘Learning from the 1915 Rent Strikes: Women’s role in housing disputes in Scotland c. 1915 to the present’ was held at Glasgow Women’s Library in Bridgeton, an excellent location for the discussion of women’s history and involvement in campaigning and we were lucky to have generous funding from the Economic History Society.

The day provided, in an informal context, an opportunity for historians and activists involved in current and recent housing disputes to reflect on the consequences of the Rent Strike and the lessons we can learn today. Has women’s position in housing changed much in one hundred years? Following the boom in municipal housing provision in the post war years, with stable tenancies and good housing conditions, at least initially, there is little in the way of ‘social housing’ left in Glasgow today. Now many women are suffering the effects of precarious housing in the private sector where rents can be increased monthly.

We are hoping to post some photos of the event and audio recordings of some of the papers on the WHS website – watch this space!